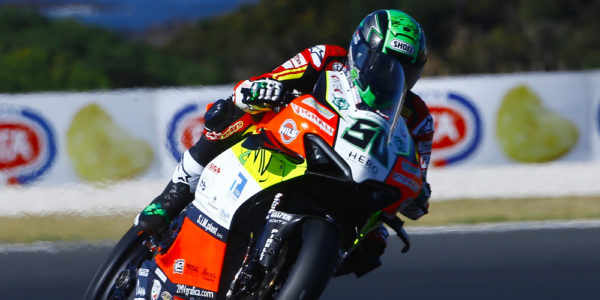 Team Go Eleven worked hard to improve the feeling of Eugene Laverty for the two races on Sunday, news of the 2019 World Superbike Championship!
In the warm-up that opened the morning of the last day here at Phillip Island, our rider rode with used tires, to check the race pace in view of a warm second run, with some set-up changes to solve some problems faced in Race 1.
A real hammer on 1.31 and a half, a great pace ahead of the two races!

At 12.00 o’clock starts for the first time the Superpole Race, a brutal 10-lap race; all the riders start with the knife in their teeth, Eugene goes straight to the attack, despite the continuous fight, keeps a pace that allows him to remain attached to the top positions. After several overtaking and a contact at the fast turn 2, Laverty concludes ninth, ahead of the Ducati Aruba of the Welsh Chaz Davies. Bring home a point and qualify ninth for race grid 2, recovering a row!

What an amazing race 2 … what a battle! A real Superbike-style race, with continuous fighting and overtakes. Laverty started really well, bringing the V4-R into P6 in the first laps; unfortunately, however, due to the lack of feeling with the front tyre and the constant attacks of the riders behind, from which he had to defend himself, our rider lost contact with the group of the first 5. The North Irishman of Toomebridge has waited in the group, letting the claws come out and coming back positions on positions in the last 5 laps, closing the door well on the last lap and finishing ninth, once again in close contact with Chaz Davies and in front of the Honda and the BMW couple. Eugene showed all his character and his class, did not give up a centimeter, saving the tyres and managing the various stages of the race to the best, coming out on the long distance as the champion he is. Really a breathless sunday, you did not see a lap without overtaking for the Ducati V4-R by Go Eleven!

Denis Sacchetti (Team Manager):
“This was our first time with Ducati, there was a lot of emotion inside the box, among the guys! We can be satisfied with how the weekend went.
The work is very different from last season, certainly more exciting, the manufacturer is helping us to grow, progress made little by little speaks for itself.
Eugene is very precise about the indications, yesterday morning with the 30.4 he showed how fast he can go, but we still do not have the rhythm to keep him throughout the race. Today, on the final of Race 2 he really made the difference, he waited for the last 5 laps to attack and when he did he did not miss a stroke, reaching a beautiful ninth place. Of course we can not be fully satisfied because the potential of the bike and the rider are very high, but it is a good and solid starting point. We need a bit of time but soon we will get there in front of it, I can feel it … we all feel it. ”

Eugene Laverty (Race 1 – P 12):
“I am very happy with the progress that we have made this weekend. 9th position in both the Superpole sprint race and race two this afternoon was a great step forward. Thank you to all my guys at Team Go Eleven Ducati for their hard work this week and we have started our season with three solid results. I am confident that this is just the beginning as there is much more performance to come from my beautiful Ducati V4 R.”

As every year Australia marks the starting point of the season, every year, between meetings of old friends, new faces, and team changes creates a unique and inimitable atmosphere that remains in the mind until the following year. And like every Sunday evening it’s time to take it all apart, take all the good feelings and fly straight to the next stop. Chang International Circuit, the World Superbike is coming (March 15-17)!