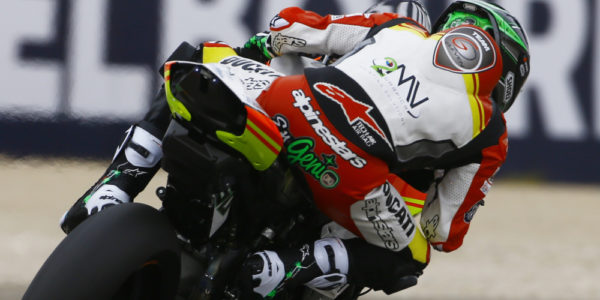 EUGENE WILL TRY TO RACE AT DONINGTON PARK!

Just two months after the incredible and frightening crash of Imola, at the exit of the Acque Minerali turn, Eugene Laverty will try to return at Donington Park, 5-7 July!

The desire to get back on the Go Eleven’s V4-R is so high that, after being forced to watch three Rounds from the “pits”, Eugenio felt ready to get on the track.
He will not be at 100% physical condition yet, but he will challenge his pain and fatigue to complete the weekend on the difficult English track.

Laverty will have to pass the medical check-up tomorrow at 4:00 pm; only then will we know if the Irish rider will actually take part in Round 8.
Fingers crossed, then, and updates will follow!

Eugene Laverty (Rider):
“Ten days ago I’d come to terms with the fact that I wasn’t going to be fit to ride at both Donington and Laguna Seca. But without something to aim for  I felt dejected and so I began to tell myself that maybe Laguna Seca could be possible if I kept working hard. It’s an anti-clockwise circuit therefore it gives the right wrist an easier time. After six weeks of slow progress my right wrist finally moved on from the acute stage and that’s when I began considering Donington too. I rode a 300cc bike yesterday and played around with my riding position to help with the pain. Donington will be a huge challenge physically but mentally I just can’t bear to stand on the sidelines if there’s even the slightest possibility that I can compete. I can’t silence the racer inside of me.”