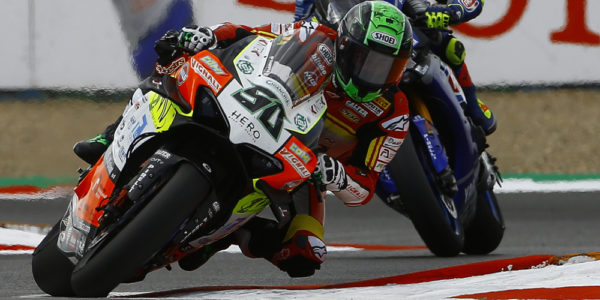 We know the meteorological uncertainty of this region of France, and today it has been confirmed! Teams and riders have been put to the test in any condition, wet, dry and … half and half!

During the FP 3 the protagonists of the WorldSBK were able to ride with the slick tyres for the first time this weekend. Eugene tried to complete as many laps as possible, in order to gather all the useful information for both the Superpole and the race.
He concludes in P 9, with a good feeling with the Ducati Panigale V4-R.

While all the teams were adjusting the last changes in view of the Superpole … here in a moment the sky becomes cloud and the rain begins to fall, sometimes even very strong, so as to delay pit lane open.
Compulsory choice of Rain tyres, the riders went to the track once again forced to have to dose the throttle.
Laverty immediately proves to be fast in these conditions, he remains for the most part in the very first positions, then concludes eighth. A good starting place on the grid for race 1 and for the Superpole Race; being in the first 3 rows is always important to keep in touch with the first ones without taking too many risks!

Before the start of the race the gray clouds give way to some timid ray of sunshine; the track dries quickly and on the grid the race direction declares “dry race”, so slick for everyone!
Eugene also bet on the SCX, a tyre created by Pirelli for the Superpole Race, softer than the others available.
The bikes still don’t have the best set-ups, and the riders are called to ride over the problems …. a battle in true Superbike style, where the difference is made by those who throw their hearts beyond the obstacle.
Eugenio encounters some difficulties in the first laps, he feels the Panigale by Go Eleven very heavy in the turns. From the middle of the race the talent of the Irish rider comes out; the laptimes are noticeably lower and it is even one of the fastest riders on track, despite the drop of the soft tyre. He recovers the gap from Cortese and passes him on the last lap, gaining a good ninth position. The technicians are already at work to solve the difficulties encountered with a full tank and tomorrow, in the Warm Up the Team will test some improvements.
We saw one of the most fought manches of this season; riders at the limit, bikes that moved and slipped, aggressive brakings … great fun for the public at home!

For the WorldSSP 300 it was a day of mixed emotions; on one side the debut, the first time on a dry track in the race, on the other side the not qualifying for the Main Race on Sunday. The riders clashed with bad weather, which once again altered the values ​​on track. Stefano Raineri remained outside qualification for only five positions in Superpole. In the Last Chance race he fought hard against the other contenders, demonstrating his talent and tenacity. Unfortunately, two laps from the conquered flag, a technical problem with the gear lever forced him to retire. Pity for the bitter end, but the Go Eleven Team thanks him for this debut weekend, with the conviction that he will have other world chances!

Eugene Laverty (WorldSBK Rider):
“We were really strong in the wet Superpole but unfortunately I slipped back to 8th position on the grid in the final minutes. The track dried in time for the race so we lined up with slick tyres. I really struggled during the first half of the race but as the fuel load decreased I was able to lap faster and set my fastest lap with just a few laps remaining. I passed Cortese for 9th position on the final lap and this was the maximum we could do today. We will try to improve the balance of the bike for tomorrow to allow me to push during the early laps of the race.”

Stefano Raineri (WorldSSP 300 Rider):
“My World Superbike debut went fairly well!
In FP 3 I did the fourth time of my group, but I crashed on the fifth lap, making up a bad bruise on my left leg. In Superpole I was at mid-standings, I was fine in mixed conditions; then when I stopped, I realized that I was out of the top 30 (qualified for Sunday’s race) for a few tenths!
The only regret of this week end is that of not having finished the race due to a technical problem: I was ninth and I was trying to recover to enter the Top Six!
Thanks in any case to the Go Eleven Team and the MES organizers for giving me this opportunity!”