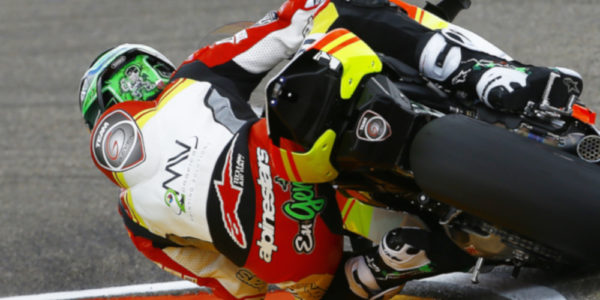 GET THE RUST OFF FOR THE SEASON FINALE…BUT WITH AN EYE TO THE FUTURE!

Summer holidays are now an old memory; the time to rest and to recharge the batteries in view of an incandescent season finale is over. On 24-25 August, a weekend at the end of summer, WorldSBK rekindles the spotlight! All the teams, all the protagonists of the championship of the series derivatives will be on track for a two days of Test.
The theater of the action will be the splendid Portuguese circuit, the Autodromo International do Algarve, located in the homonymous region, a few kilometers from the city of Portimao.

Also present on the track will be the Go Eleven Team with its rider  Eugene Laverty.
After the splendid and leathery performance at Laguna Seca, on returning from the serious wrists injury, the Irish ace will try to get the rust off, and try to push to find the positive sensations he had until the Imola Round, the place of violent crash.
The two-day test will also be a very important test bench to understand the real conditions of Eugene riding the V4-R Go Eleven; lap after lap the rider will improve the pace again, testing new solutions for the race weekend at the Algarve circuit.

The spotlight will not only be on the track: for the 2020 season the WorldSBK circus is preparing for many changes. Several Top Riders will change manufacturer, the rider’s market becomes more and more incandescent: as everyone knows by now, Eugene Laverty will race with the official BMW next season.
Despite this, the Go Eleven Team is proud to have had among its ranks a rider of the caliber of Laverty, to have given him the chance to race with Ducati this season and we will focus 100% to get excellent results in the last 4 Rounds.
The Team Manager is, however, already looking for new talents and new riders to ride with the Panigale V4-R in the 2020 championship.
Between the Tests and the Portimao race, several pieces will be placed and the Go Eleven Team hopes to announce in few weeks the future rider.

But now everybody have to stay focused on this wonderful Superbike finale, with 4 Rounds all to live and follow!
Work for the present, but with an eye to the future!

Eugene Laverty (Rider):
“We have the perfect opportunity to test at Portimao this weekend before the race in a fortnight. I absolutely love this circuit so I can’t wait to go riding! During the summer break I continued to rehab my right wrist and it’s almost there now. I’m confident that I will be able to complete this test without any major physical limitation.”