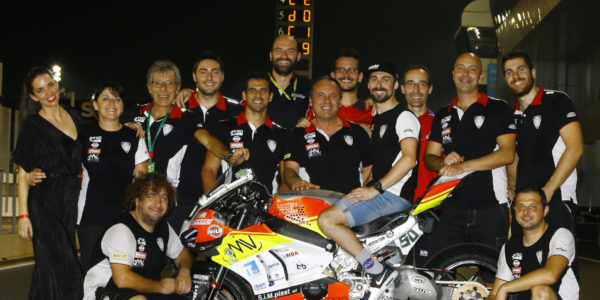 Finishing the season with a race like that was what we wanted!
A great sixth place, with an almost perfect performance, all comeback due to a contact during the first lap. The Ducati V4-R by Go Eleven and Eugene seemed to really fly in the night of Losail!On Saturday it opens with a Warm Up on hot asphalt at 2.00 pm; a different off-set solution does not give the desired result and the bike appears immediately difficult to ride.
When the new solution doesn’t work, you know it’s the wrong way, so you go to the opposite side and bet on the Superpole Race!

In Superpole Race the technicians study a new steering angle position, change both off set and trail.
Laverty starts well, feels immediately at ease on the seat and starts to perform in some good overtaking. In just 10 laps he is forced to aim for the top 9 to be able to start in the first three rows.
The Irish ace passes Rinaldi, then Mercado and Sykes in one shot, then he strongly defends the position on Marco Melandri and manages to finish in ninth place.
A point brought home and, even more important, third row earned on the starting grid for Race 2!

Race 2 starts with Eugene Laverty determined to do well, greeting the fans of Borgo Panigale and the whole Go Eleven Team with a performance to remember.
The start at the green light is quite good but in the excited early stages he loses some positions, both at the first corner but above all at turn 5, where a contact with Rinaldi pushed him off the track and falls back to fourteenth.
The Irishman remains lucid, he regains concentration and launches himself with great hunger and healthy sportsmanship in pursuit of his opponents.
Lap after lap, he overtakes slower riders and sets off in pursuit of Razgatlioglu: with an impressive race pace he regains tenth on tenth and in the last two laps he manages to pick up the small group fighting for fifth position.
A last phenomenal lap, two great overtakings on the official riders Haslam and Van Der Mark, project the Team form Piedmont in sixth position.
A great result that repays the team of work done in the 2019 season!

As the lights go out on the Qatar track, the curtain falls on the WorldSBK season; like every year, with the motorcycle off, competitiveness leaves room for a faint feeling of melancholy. The riders greet their bikes, their teams and every single person who has been close to them on this journey, some towards new colors, some looking for confirmations and some ready for the first 2020 tests.
From this land of the Arab world, the Go Eleven Team thanks all those who participated, who experienced the mixed emotions in the 9 months of competitions around the world: from the team to the sponsors, from hospitality to fans.

Eugene, next year you will be on track with a new manufacturer, but your team congratulates you on all the moments we lived together and for believing in our project from the beginning; with you Go Eleven has been able to smell the podium closely and has managed to win a Top Independent Rider. Thanks for everything and good luck for the season to come!

Denis Sacchetti:
“Another season has come, and after tonight’s race it remains a big regret; what could we have done if Eugene hadn’t been injured at Imola? With if and with but we don’t make history, but surely we could have enjoyed all year round, at least as much as we enjoyed this evening seeing him riding a race like this.
The team worked well and was able to find a solution that would allow Laverty to ride strong, after the contact on the first lap we made a great comeback, Eugene made us stay with our heart in our throat until the last corner! At the pits we could smell the victory as an Independent Team, but the exchange of positions with Haslam and Van Der Mark at the end made us lose those decisive seven tenths. I thank Eugene for the great season finale and the whole Go Eleven team that has always given his best for the entire 2019 season!
A special thanks goes to Ducati, who made this challenge possible and made us grow sportingly.”

Eugene Laverty:
“To finish in sixth positions in the last race of the year and equal our best result it’s a fantastic season finale!
We have always been coming strong at the end of the races; we saw that in Argentina and again this weekend, so maybe with a couple of laps more we could fight for P 4. We showed that we have the pace.
Disappointing what happened in lap one when Michael Rinaldi overtook me and pushed me out of the track back to fourteen position; that hurt our race but it’s racing.
I never gave up until the checkered flag and we had a good result.
Thank you very much to Team Go Eleven powered by Ducati!
I would like to gift them with the best result of the season, we missed this by one position, but most important was the right way in Argentina and continue this pace here in Qatar.
Thank you to entire Team for never give up and we got there again!”