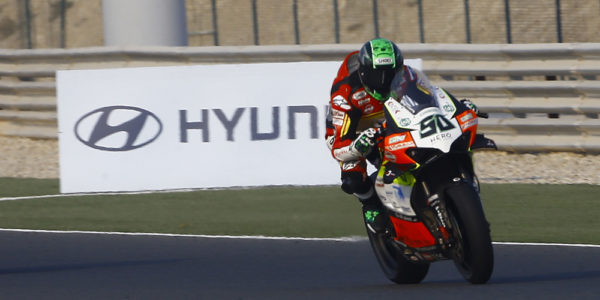 NINTH POSITION, ANOTHER COMEBACK IN RACE 1!

Friday in the desert of Qatar start with Eugene Laverty in great shape on the Ducati V4-R.
In the Free Practices 3, ran at 15.00 with almost 50 degrees of asphalt, the Irish score a great sixth place a few tenths from Jonathan Rea; a result that raises expectations for Race 1.
The changes in the length of the swingarm made in the night seem to have given considerable advantages, confirmed by Eugene’s smile when he returned to the pits.

The Superpole don’t go as planned; with about 10 degrees less on asphalt, unexpected chattering problems emerge. With qualifying tyres, even lap time don’t improve.
A particular condition that seems to have damaged the four Ducatis on the track, all forced to chase.
Sixteenth position on the grid that will force the Go Eleven rider to a comeback race.

Despite the negative Superpole, the race starts with good expectations after the step shown in the free practice sessions.
Eugene starts well, he immediately recovers three positions and forces in pursuit of Rinaldi. He overtakes him towards the middle of the race and imposes a similar rhythm, and in some laps faster, compared to the fight for the fifth position.
The gap taken in the early laps is too much to be able to rejoin and give battle.
He concludes, thus, in ninth position, second in the Independent Rider standings at the finish line, bringing home a solid performance.
Because of the chattering that was still present, we missed a bit in order to fight for the top 5. To give to the rider the feeling of the first afternoon, eliminating the vibrations, will be the goal of the Go Eleven Team for the two races tomorrow!

Tomorrow, Saturday evening at 16.00 Superpole Race and at 20.00 Race 2 (local time), down the visors, first gear inside and green light to the last two races of the WorldSBK season!

Eugene Laverty:
“The race was hard, but was good to finish in ninth position. I had a really difficult Qualifying in Superpole, while FP 3 was really strong: I was sixth fastest in that session and I didn’t have any chatter. I was really happy with the bike, but then in Superpole in different conditions the chatter returns, so I need to find the answer to this problem.
If we can cure the chatter there is the potential to finish in fifth position!”