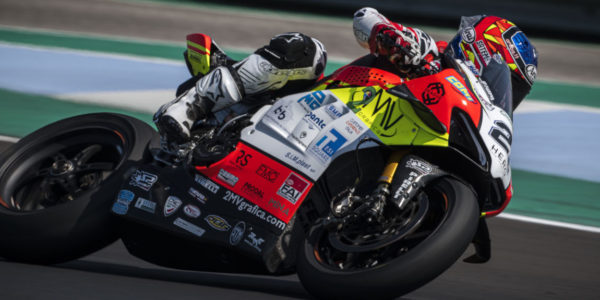 THE SUN SETS ON MISANO TESTS, MICHAEL RINALDI IS AT REDDING AND REA’S HEEL!

As soon as the WorldSBK protagonists cross the gates of the circuit, they give back prestige, considering laptimes, to the series derivative championship! All Ducati Superbike teams, the Kawasaki Racing Team and some MotoGP riders, including the official Aprilia and KTM teams, got the rust due to months of inactivity off on the Misano track, which was kissed by good weather and high temperatures.

Michael Rinaldi and the Go Eleven Team arrived ready and prepared for the appointment, bringing several innovative solutions and some comparative to be tested. The rider from Romagna was able to stay complete the huge work for the overall sixteen hours of the session, doing more than one hundred laps. The choices gradually taken helped the team to get closer, with the necessary improvements on the bike, to the best lap time, without neglecting the work with used tyres. Go Eleven was able to confirm and improve itself session after session, till best lap in 1.33.560 in race configuration at the end of the second day, following closely Scott Redding and Johnny Rea, a few tenths from the two official riders and widely ahead of Chaz Davies and the Championship leader Alex Lowes. Really astonishing two days for the Italian team returning from the lockdown; inside the box you can breathe a unique harmony!

Now it’s time to prepare and arrange the final details in view of the restart of the season; there is only one month left for Jerez de la Frontera, the first European stage of this “caliente” WorldSBK 2020. Michael, stay focused and trained, that soon it will be time to give the other riders a hard time!

Michael Rinaldi (Rider):
“This two day test was very positive for us! After many months we went back on track and completed several kilometers obtaining useful information for the restart of the Championship. At the end of the two days we found the best solution, and we also managed to be very fast. Considering that our time was scored with race tyre, while most of my opponents used the qualifying tyre, I can be satisfied with the work done. In race configuration we were even closer to Scott! Now we have to fix some details when the tyres become used, in view of the first seasonal Rounds. In the two days the bike has always been improving, the changes have given me more confidence and therefore I was able to ride my Panigale as I wanted. Thanks to all our fans and sponsors who, despite the difficult period, allowed us to return on the track as soon as possible; see you in Jerez! ”

Denis Sacchetti (Team Manager):
“It was fundamental for Go Eleven to participate at the two days test in Misano. After such a long period at home, the technicians needed to resume their work rhythm and, for the rider, it was important to get back on track and ride his Panigale V4-R. We are happy with the result of these two days of testing, because we have completed an intense work schedule. The lap time is important and today it satisfies us! Michael was very good, fast both on one single lap and in race peace, in line with Redding and the World Champion Rea. We can’t wait to race in Jerez!”