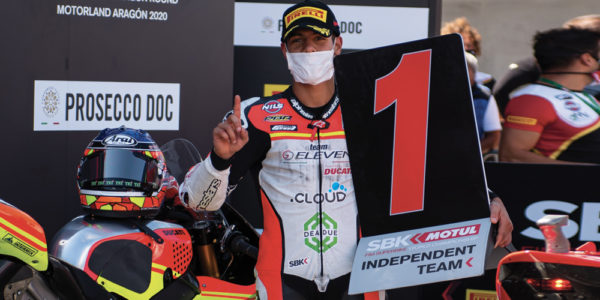 Don’t stop me now, I’m having such a good time, Queen sang in 1978. Nothing better represents the magic moment of the Go Eleven team and Michael Ruben Rinaldi, now firmly in the top five positions since the restart of the Championship. And on Sunday in Aragon another crazy race saw the 24 year old from Romagna as the protagonist; excellent comeback after a complicated Superpole Race, amazing fight with Toprak and Van Der Mark Yamahas, fifth place and another Top Independent won!

In the Warm Up the cool temperatures affected the performance on the track. Michael tested the SCX at the rear, setting a good race pace at 1.50 high, proving he could be in the game in the two races to come.

The Superpole Race, the Achilles’ heel for Go Eleven, starts with a temperature of about 25 degrees of asphalt. As happened yesterday, the different conditions allowed the Yamahas to get back into the game for the main positions. Michael wasted some time in the scrum of the first two laps, fighting with Toprak and Gerloff, then, as soon as the tyre got used, he went after the group in front of him, setting a “crazy” pace. 1.49.820 recorded on the penultimate lap, two tenths from Rea’s fastest lap, a sign that the competitiveness of our bike increases as the laps go by. In the final he manages to pass Baz and Haslam, taking home two points and achieving the eighth box for Race 2 grid. Some positions lost compared to Superpole, but the important thing is to stay in the first three rows, also considering that, usually, the strength of the V4-R Go Eleven is from the middle of the race onwards.

In Race 2 Michael starts well, immediately recovering that row lost in the Superpole Race. Usual scrum, usual show and usual lost of time compared to the first 3 in the first laps. The fight with Toprak, once again, was hard, exciting and correct, with a perfect overtaking at turn 5. After being in frontof the Turkish talent, already his rival at the time of the Stock 1000, Rinaldi was able to set a good race pace, being for a few laps the fastest rider on the track: this allowed him to go after Scott Redding. The British was riding a few tenths slower than Michael, but the Go Eleven rider was able to close the gap without having the chance to attack him. As a photocopy of yesterday’s race, in the last laps he attacked Van Der Mark, passed him and left him in place, finishing in the slipstream of Scott. Fifth position just six seconds from the first, a good feeling found on the bike and, for the fifth consecutive time Top Independent. And now the ranking is starting to get interesting, Michael is seventh in recovery on the fifth. Aiming for the top 5 final is not wrong, you have to believe in it and continue at this pace!

Michael Rinaldi (Rider):
“I am very happy with this weekend because it was essential to confirm our potential; to achieve a fourth and a fifth place, twice Top Independent is really nice and positive. Today I am happier than yesterday, not for the position but because we were faster, we were able to improve the bike and this was important. For the next Round, which will also take place here at Motorland, we will try something different to find those few tenths we need to fight for the podium”

Denis Sacchetti (Team Manager):
“Today’s result makes me even happier, because the gap from the leader has been reduced compared to yesterday. Michael was about 6 seconds faster than himself and there is no better as it shows how close we are getting! Next Sunday we will still be on this track, so we have the opportunity to work on the data collected in these two races to improve even more, and it will be important because none of our rivals waits us. Michael is in great shape, always very constant and incisive, also in the team there is a beautiful feeling … I hope Friday arrives soon!”