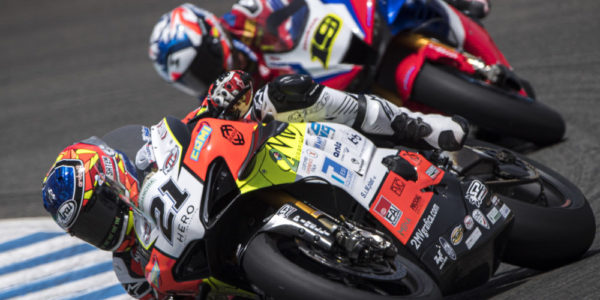 Positive note in the warm Saturday of Jerez de la Frontera for the Ducati V4-R of Go Eleven and Michael Ruben Rinaldi! In race 1 a steadily faster pace than the first group give to the rider from Santarcangelo di Romagna the possibility to come back several positions, after a not too brilliant Superpole.

The FP 3 were useful for testing the long-term drop of the tyre; despite the “cooler” temperatures, the data collected helped to perfect the set-up in view of the first post-lockdown race. In addition, another rear tyre solution was also tested, looking for the Race.

In Superpole Michael immediately showed he was in condition, finishing the first laps in race configuration a few cents from the first 5. Once the qualifying tire was on, a small mistake in the first sector and a feeling that was not optimal with the greater grip provided from the Qualifying tyre they forced Michael to defend himself in tenth position. A bit of regret remains because 3/4 positions could be achieved with less than two tenths faster. But it was known that the race would be long and very tough, the important thing was to start not too far behind.

P 1    S. Redding   1.38.736
P 2    J. Rea   + 0.034
P 3    T. Sykes   + 0.040
…
P 10   M. Rinaldi   + 0.920
The true talent of the rider, combined with the good combination of the Ducati V4-R Go Eleven, were seen in Race 1!
60° of asphalt, a real “grill”, has warming up the riders until 2.00 pm, green light time. Michael Rinaldi starts well, immediately overtaking Davies, but then he lost some positions in the scrum of the first lap; he starts his comeback with several laps in line with the top of the class and really exciting overtaking. He closes on, overtakes and goes away from Van Der Mark and the two Honda HRC of Haslam and Bautista in a few steps and sets off in pursuit of the top five. From mid-race onwards Michael is constantly the fastest on the track, managing to halve his gap from the then leader Jonathan Rea (from 6.5 seconds to 3.8 on the third last lap). Sixth place, first independent Ducati at the end and second (behind Loris Baz) in the Independent Team ranking. It is by far the best race ever, in terms of performance, for both the rider and the team! And at some point in the race, from the pits, it was also thought that we could go back to the front, but in the last laps the overtaking of the first part of the race caused a small tyre drop. Tomorrow, with a good Superpole Race, the goal will be to start a few rows further ahead, in order to save a bit in the first laps during Race 2.

For today Go Eleven enjoys the excellent state of mind, the great result and the awareness of having a very competitive motorcycle-rider-team combination!

Michael Rinaldi (Rider):
“I am happy because we kept a good pace all the race long, but there is a bit of regret for the Superpole; in Superpole I did not have a good feeling with the tyre and I was not able to make the most of it. Starting tenths we lost time in the overtaking and this created a gap with the leaders. I reduced it, I pushed to 100%, we got close but it was impossible to do more to catch them. Today in my opinion we loose the opportunity to fight for the podium due to a qualification not too positive, but the pace has shown that we are there! Tomorrow we will try to make an excellent Superpole Race in order to start in a better position!”

Denis Sacchetti (Team Manager):
“This is a great result for us, not so much for the position, but for the gap from the first to the end of the race. Friday did not start in the best way, but in FP 2 the team and the rider together gave a great show of strength, and it was a great pride for me. In the race Michael went really fast, for almost 3/4 of the race he was the fastest on the track, and if only he hadn’t been busy in the first laps today, who knows what could have shown us! This excites us and motivates us for tomorrow’s race, hoping to start a little forward on the grid! ”