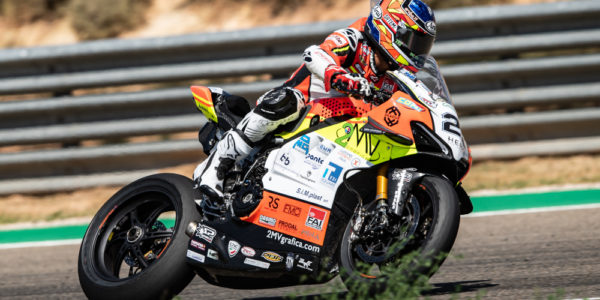 Sensational performance by Go Eleven rider Michael Rinaldi on the Aragon track! A concrete and consistent first day of racing, which gives a fourth place got on the penultimate lap and 13 points in the standings!

Lower temperatures, around twenty degrees of asphalt, and a strong cold wind welcome WorldSBK since FP 3. These different conditions allow Yamaha riders to take a notable step forward. Michael took to the track with a new swingarm setting, with the aim of improving the movement of the bike. Good sensations felt by the rider and a set-up halfway between FP 2 and FP 3 to have a great qualifying.

Qualifying starts with a palpable tension in the box, where all the staff knows that Superpole is too much important for the race. Rinaldi starts off strong entering the Top 5 in race configuration, then goes on the SCX (a softer tyre usually used in the Superpole Race) and sets a great time on the high 49, putting himself just 11 thousandths from Chaz Davies. But on this track, characterized by a lack of grip throughout the weekend, the qualifying tyre can really make a difference. With the latter the rider from Romagna enters the track and, riding alone, records a very fast 1.49.256; second row, fifth place and first two rows goal centered.

Race 1 was important, it was important not to make mistakes, because, perhaps, never like here at Motorland, the Team had the awareness of being one of the strongest. The number 21 starts well defending fifth place, but in the first laps an exchange of contacts with Toprak and Haslam slows him down. Few laps from start of the race Alex Lowes crashes, with the bike and rider stayed in the track, forcing Michael to lose about a second. As the laps go by, confidence increases, time improves, overtakes Razgatlioglu and Haslam’s Honda HRC and brings the attack to Loris Baz, rival for the Independent Team. After the French rider on Yamaha is now the time to chase Chaz Davies; Ducati’s Welshman has a slightly faster pace, a few tenths, and staying close to the exhausts of number 7 is very complicated. Towards the middle of the race, a slight drop in the pace slows down the comeback of the Go Eleven rider, but in the last 5 laps he returns to good laptimes, rejoins Van Der Mark, passing him on the final with a powerful detachment at turn 16, at the end of the straight. Great fourth place, only 7 seconds from the first, and another exciting race which ended at the Parc Ferme as Top independent (fourth time in a row!). Were you looking for consistency before the weekend? Well, few riders have scored more points than Michael since the restart of the Championship!

Michael Rinaldi (Rider):
“We had another good race, after Jerez and Portimao it was important to be constantly in the leading positions! Fourth place and Top Independent is a great result for us. As happened in Jerez and Portimao, we are close to the podium but I still haven’t managed to get there, so we still have to work to improve and fight for the top 3. I can’t wait to get back on track tomorrow!”

Denis Sacchetti (Team Manager):
“It’s nice to be always in front! The team is giving a good show of strength, the technicians together with Michael are doing a fantastic job and I’m sure that by continuing on this line and with this constancy, we will soon achieve one of those steps that we are chasing so much. We are getting closer and closer. Michael is fully exploiting the potential of our bike, in every occasion and every session, here we have been good also in qualifying, but we can still improve!” 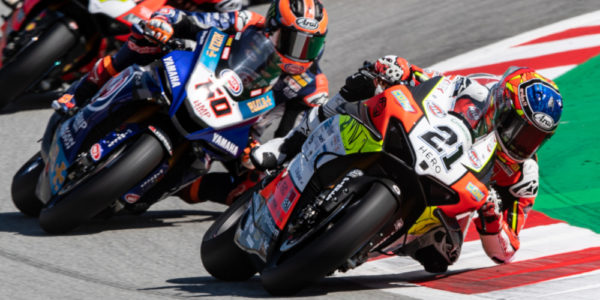 IT HURTS, BUT IT’S RACING!

The races never end, up to the checkered flag; today the Go Eleven Team tried it on their skin! In… 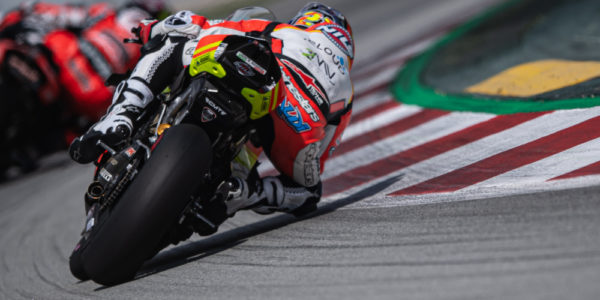 A weather-uncertain Friday welcomes the WorldSBK riders. Dry conditions in the morning, wet in the afternoon, partly changed the teams’… 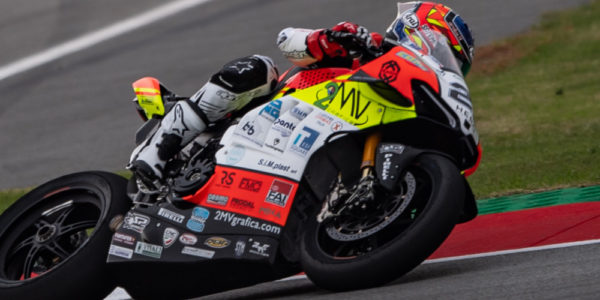 DRY OR WET TRACK; RINALDI IS ALWAYS BETWEEN THE BESTS!

A weather-uncertain Friday welcomes the WorldSBK riders. Dry conditions in the morning, wet in the afternoon, partly changed the teams’…