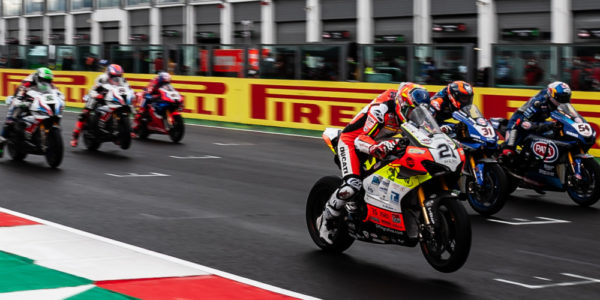 EXCELLENT PLACEMENTS IN WETTEST WEEKEND EVER!

France just doesn’t like dry tyres! On the Magny-Cours circuit the riders faced, for the third consecutive day, insidious weather conditions. It is one of the few times in which all the sessions have been held in heavily wet conditions.

The day starts in a very positive way for the Go Eleven colors; Michael starts strong in the Warm Up completing several laps always in constant improvement. Towards the end he takes the lead, with an excellent lap on the 47.8; three tenths faster then the opponents. A little crash at Turn 13 made him finish the Warm Up prematurely, while maintaining the first place. Rider ok, Ducati ok.

In the minutes before the Superpole Race the sky seems to open up and the track dries up little by little. While the teams prepare for a difficult tyre choice, the rain returns to be the protagonist, and returns to be heavy. Soft Rain solution for everyone and green light! Michael sprints well and immediately enters the fight for points (remember that in this race points are assigned to the top 9). Intense and thrilling, with a bit of irritability between the two at the end of the race, the fight between the revelations of the WorldSBK Garrett Gerloff and Michael Rinaldi. On the checkered flag it is the Go Eleven rider who passes in front, in seventh position, keeping his starting place for Race 2. Three points and an excellent race pace, in line with the Top 5.

In race 2 Michael starts even better than the previous races, taking fourth at the first corner. With a lot of water on the track he proves to be at ease, being in pursuit of Lowes and overtaking him in the 7-8 chicane. As the laps go by, the amount of water on the asphalt decreases and some rear grip problems arise. The rider from Sant’Arcangelo di Romagna was taken first by Loris Baz and then by Chaz Davies. The fight ignites when Van Der Mark arrives, the number 21 and the 60 swap positions several times fighting side by side. The Dutchman’s pace is, however, faster; so in the last part of the race Michael controlled the situation, bringing home an excellent result for Team Go Eleven. Sixth place and 10 points more in the standings!

Three consistent races in complicated conditions, really excellent results for Michael Rinaldi, who proves to be a fast and smart rider, able to know the limit between making a good result and crashing. With these 23 points earned, Michael is confirmed in the fight for fifth place in the Championship and in the lead in the Best Independent Team standings. At Estoril, Portugal, October 16-18 awaits the showdown for the WorldSBK World Championship!

Michael Rinaldi (Rider):
“It was a two-sided weekend: on the one hand, I’m happy because the weather was really terrible, with three days of water, and it was the first time for me. The track, every time I entered the track, was different: more water, less water, partially dry line… We were good, in general, to bring home the result in every race, and this is important. On the other hand we lacked grip at the rear, and it was frustrating because we had the speed to fight for the podium. When I went to open the throttle, I didn’t accelerate and the riders who overtook me had a big advantage in acceleration. This problem has haunted me all weekend, we have improved it but we have not been able to solve it. To win we have to improve even these small details which are fundamental. Anyway, let’s look at the glass half full, and we will treasure the points and experience of this weekend!

Denis Sacchetti (Team Manager):
“In the first part of the race we were quite fast, in line with the race pace of the first 3, then in the last 10 laps we were unable to maintain this pace but Michael was good at taking home an excellent position. The conditions were very difficult and risky, the boys and the rider were able to manage these unpredictable situations well. We recovered points on 5th in the general classification and we have a good advantage in the Best independent Team classification, a very important goal for us. We will go to Estoril to play it all the way !”