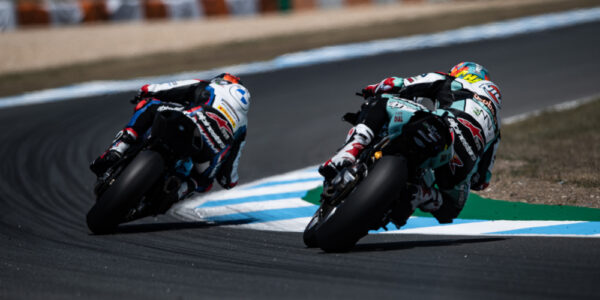 CHAZ COMEBACKS WITH DETERMINATION IN RACE 1!

A Saturday that leaves, once again, a little bitter taste in the mouth of the Go Eleven Team and its rider Chaz Davies!

FP3 was the only session available to the Welshman to perfectly set-up the light-blue Ducati V4-R on the Estoril track; in 30 minutes he should have made up for the time lost yesterday afternoon. The number seven entered with the SCX and immediately managed to ride faster than his best lap, signing a 1.37.259 which gave all the Go Eleven staff good feeling.

For the Superpole the Go Eleven technicians made some changes on the front, trying to support Chaz in the braking point. Confidence wasn’t bad, but qualifying is all about all-or-nothing with the Q tyre. Unfortunately the Go Eleven rider found a yellow flag in his good lap, caused by an on the gravel of Rabat in turn 1, and, with the new rules that immediately cancel the laps carried out under the yellow flag, he immediately got up, tried to safeguard the tyre to do one more lap, but the Q doesn’t hold up two laps, and in the last sector he had to raise the white flag. He therefore found himself relegated to 15th position with no possibility of improvement. A rule, the one concerned to the yellow flags, which causes discussion, and which in this case certainly penalised the progress of Race 1 and the Superpole Race.

In Race 1 there was just one possibility: attack and try to recover as many positions as possible. The tyre chosen is the softer one at the rear, just to try to be aggressive in the first laps. At the start, Chaz recovers a couple of positions, throwing himself into the group that goes up to fourth position. The group is large and Estoril is also a complicated track in which to overtake. Lap after lap he keeps his pace steady on the high 37, overtaking all the riders in the group ahead of him; Rabat, the two official BMWs, Locatelli’s Yamaha and Mahias’ Kawasaki. Once past Van Der mark he tries to set a strong pace to increase the gap with his opponents behind, but the top 5 riders have already run away. At the end of the race he recovers almost more than a second per lap on Michael Rinaldi, but the gap accumulated at the beginning does not allow him to re-enter the fight for the fifth position. A good race for Chaz, who was able to get the most out of a complicated situation, still earning good points for the Championship.

Chaz Davies (Rider):
“Difficult to be happy with P 6, but probably I should be reasonably content, considering where we started and considering that we lost all FP 2 yesterday. With this two factors, it’s easy to overlook the impact that they both have on the weekend. Today, during the race, I felt like a Free Practice session, I was understanding the bike a little bit better as the race progressed, I wasn’t totally happy, and obviously I was in a lot of traffic, so I had to come through a little bit. But when I did come through I started to understand a few things. I feel like our weekend is conditioned by the yellow flag rule, unfortunately I was a victim of, I mean, we start in P 15 again tomorrow in Superpole Race, which again will be really difficult. In this circuit it’s not easy to overtake, too. We need to work hard on our package tonight, to try to get a good start tomorrow and at least try to move a little bit forward in the Superpole Race, to have the best opportunity to jump on the podium in Race 2!”

Denis Sacchetti (Team manager):
“Chaz raised the day with an incredible comeback in Race 1, after the unlucky event of Superpole, to which the race direction will have to find a solution in a short time, by changing the rule. The yellow flag has penalised us a lot, and starting so back, I think he has already done a miracle. Now we have a couple of points to work on to improve the bike, but tomorrow it will be important to do a good Superpole Race, in order to reduce the gap on the starting grid.”