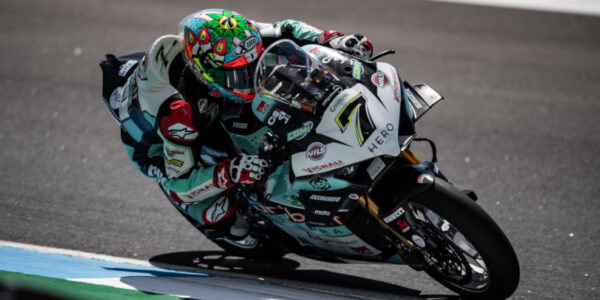 MORNING AT WORK ON USED TYRES, AFTERNOON WATCHING FROM THE PITS!

A positive Friday in the morning, difficult in the afternoon for the Go Eleven team on the Estoril track in Portugal.

In FP 1 Chaz entered the track to evaluate the race pace with a view to Saturday and Sunday. Lap after lap he improved his best lap, he always remains among the top of the standings. Over 20 laps always around 37 high / 38 low, carried out without changing tyres, have shown that the number seven has already entered race mode. At the end of the session, several riders put on the SCX soft tyre, making a clear step forward. Here, on the Portuguese ups and downs, it is to be considered whether the soft tyre will be able to complete all the laps of the race.

In the afternoon, the Go Eleven technicians had studied a busy schedule, both to test a new solution on the front, and to evaluate the SCX on the rear. Unfortunately, already from the first lap Chaz felt something strange on his V4-R, and, after four laps, he was forced to stop in the pits. A technical problem forced him to watch the whole session from the outside, without having the opportunity to express his potential. Really a shame, especially because FP 2 are important for the continuation of the weekend, as FP 2 normally take place in similar conditions to those of the two main races. That’s racing, and tomorrow it will be up to recover the time lost. FP 3 will be crucial to get ready for qualifying!

Chaz Davies (Rider):
“This morning was ok, in the FP 1 we were more or less in the right area. I had a few things to try for FP 2; unfortunately I had a problem from the beginning of the session and it didn’t allowed me to get going and then we had a technical problem and I just had to stop. So, I had zero chance to evaluate anything this afternoon, which is a shame because obviously the race will be run in these temperature, at least the two main races. It’s a big shame not to take any data from the session. But, it is what it is, now we have to work well tomorrow morning in FP 3, even in the cooler conditions, then do a great Superpole and then hopefully we can have a good race. Obviously without data the set-up of the bike is a bit difficult, but we have to try our best!”