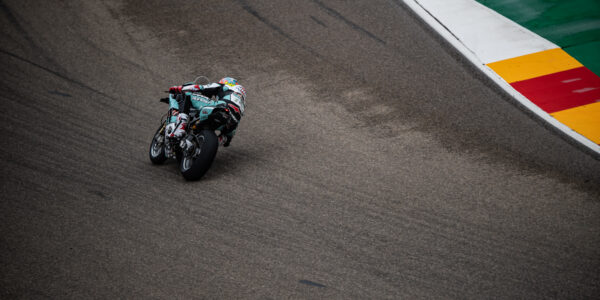 A truly changing Sunday in Aragon, with mixed weather conditions that affected all the sessions. A light rain wet the track several times, without being too heavy. A dry / wet mix created problems to teams and riders.

In the Warm Up, in real wet conditions, the WorldSBK protagonists had the first opportunity of the season to compete with rain tyres. Nobody, however, took too many risks, as it was a very close session to the start time of the Superpole Race.

Just before the Superpole Race, the rain drops and half of the circuit turns out to be almost dry. As soon as he arrived on the grid, Chaz decides immediately convinced to start with intermediate tyres. It was the right choice and the Welsh rider makes a huge gap together with Lowes, Rea and Gerloff. Towards the middle of the race the battle for the podium ignites, the two “Independent” riders swap positions, but the American Yamaha rider was a bit more fast. Excellent fourth position obtained, other good points brought home and a perfect starting position for race 2. Once again, just out of the podium, but congratulations to Chaz both for the courageous choice at the start of the race and for the management of the race!

For Race 2 the conditions are, perhaps, even more complicated. It rains until you reach the grid, after which it stops and a pale sun also comes out. Chaz and the Go Eleven team make for a risky choice, which turned out to be wrong. Rain in front, intermediate behind. Unfortunately, however, not even the time to prepare for the flag to flag and Chaz loses the front, crashing in turn 7. He gets up, goes to the pits to put on the slick tyres and returns to the track determined. Each lap is on average half a second faster than Scott Redding, who will be the winner, without right stand and rear brake, without a wing and part of the rear fairing. The consolation of Race 2 is having set the fastest lap and showing that we could have won the race!

Luckily, not even the time to throw down this Race 2, and it’s already time for Estoril, another track as spectacular as it is technical. Hoping that the weather will be friendly, the goal is to bring home some good races and to get solid points for the Championship!

Congratulations to Scott and to all the Aruba.it Racing-Ducati Team, for the first win of the season for the Ducati Panigale V4-RS!

Denis Sacchetti (Team Manager):
“Today was a strange day, this morning Chaz made the right tyres choice, a courageous choice that paid off in the Superpole Race. Unfortunately in the afternoon we crashed on the first lap and it was a real shame! He managed to restart and without the right stand, the rear brake and the right wing he was the fastest on the track and set the fastest lap of the race. It’s a pity…but we are happy by the fact that we could fight for the win, the pace was there and it was one of the bests!”

Chaz Davies (Rider):
“Today obviously it was really difficult. The Superpole Race was a positive result, we definitively made the right decision with tyres and we had a solid race, finishing P 4. I was happy with that, it was a good starting position for the second Race. For race 2, from the warm up lap I knew we have made the wrong decision with the tyres. I had to decide whether to stop immediately before the race start and put the full slick or start the race. I decided to start the race, but I had a wet front tyre, and at Turn 7, on the very first lap I close the front. Exactly why I am not sure, I could have been a little bit on an extra wet path, sure even that the front tyre wasn’t fully up to working temperature and it scrubbed. But anyway I crashed unfortunately, I picked up the bike, I went to the garage, I put the slick on, then I just tried to enjoy the seventeen laps. I just got the small consolation to get the best lap of the race and the pace wasn’t so bad. I just obviously wished that I made the decision to start on slicks. Today it was a really difficult day, it was really easy to be the hero or the zero and we were both today, hero moved in the Superpole Race, zero moved in the main race. Anyway it has been good to enjoy the weekend with the Team, thanks for the effort and look forward to Estoril next week!”