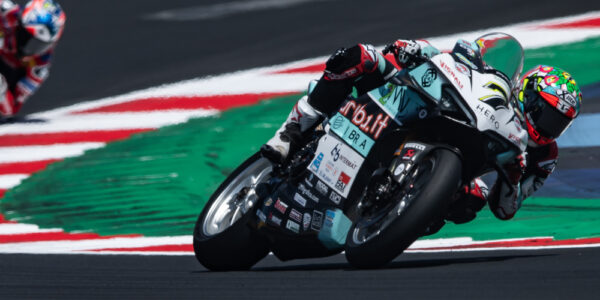 CRASH IN RACE 1, IT’S TIME TO RESET TODAY AND RESTART!

The Saturday of Team Go Eleven on the home track did not go in the best way; a crash in Race 1, while he was fighting for sixth position, forced Chaz to finish at the bottom of the standings.

After yesterday, the technicians made some changes both on the front and on the rear, to allow Chaz to find the right confidence with his Ducati V4 RS. In FP 3 the Welsh rider rode without taking too many risks, with the aim of evaluating the changes made during the night.

Superpole is always a very special session, because it affects the rest of the weekend and provides the starting grid for two of the three races scheduled. The number 7 was able to make good use of the first qualifying tyre, immediately placing himself in the top 10, in order to guarantee a good starting position for Race 1. He came back to the pits, quick tyre change and was immediately on the track again for the second time attack. Unfortunately, due to some traffic, he was unable to take advantage of the Q and improve his Best lap. Fourth row and tenth position on the starting grid.

Race 1 started with 48 degrees of asphalt, pushing almost all the riders to opt for the new Pirelli solution at the rear. Chaz had a good start, entering ninth position; in the first laps he managed to pass Bautista and Mahias without wasting too much time in the battle. He then launched in pursuit of Tom Sykes’ BMW and Alex Lowes’ Kawasaki, which were in sixth and fifth place respectively. The pace shown was not bad, in line to compete for the positions close to the podium. Unfortunately, towards the middle of the race, he crashed into turn 4, losing the front. Bike on the gravel and the race over, despite he managed to restart at the back of the group. A crash similar to yesterday’s one in FP 2, but no consequences for the rider. The feeling, however, is still not the best and we felt the lack of testing on this track compared to the other Ducati riders. A quite big change is needed for tomorrow, to earn those few tenths that can make a difference!

Team Go Eleven congratulates with Michael Rinaldi and his team on their amazing win today. Great maturity and concentration, in a race 1 dominated from the first to the last lap: congratulations Michael, enjoy this day!

Chaz Davies (Rider):
“I am obviously disappointed of not finishing the Race. I was ok, in the average, for what concern the feeling for the first part of the race, then I started to have a little of vibration issue and struggling in a couple of areas. I tried to do my best to ride around the issue, but honestly I couldn’t really find a way to do it. So I was just trying to find the pace, but then I crashed. I am more disappointed for the feeling, I didn’t feel like anything was too good today and I don’t have a good feeling with the bike too, here in Misano. So we need to understand exactly what’s going on and we need to improve for tomorrow!”

Denis Sacchetti (Team Manager):
“Sometimes we celebrate and sometimes not, the important thing is to try always and in any case, and Chaz never backs down. Since yesterday we have been struggling with some problems that limit him, he can’t ride as he wants, and we didn’t expect to find ourselves in this condition on the Misano track. Here we were unable to take part to the winter tests due to Covid, and this certainly put us at a disadvantage, but we still have to try to collect the maximum. Now let’s think about tomorrow, we still have two races to bring out the best! ”