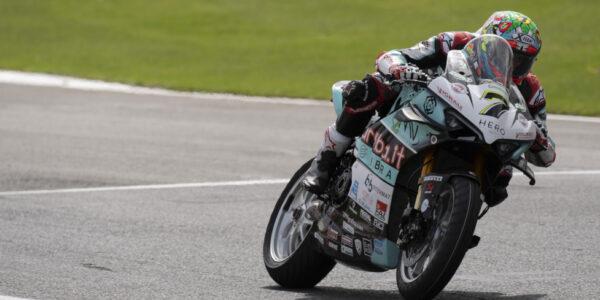 DAVIES COMES BACK AND GETS THE MOST OUT OF DONINGTON PARK!

What a Sunday in Donington Park! Once again the English weather wanted to be protagonist, messing up the plans of the Team and the riders. Go Eleven gets the most out of this track, considering the physical condition of the rider and gets back fighting for the top positions.

The Warm Up takes place in dry conditions, after a lot of rain fell during the night. The times are all very close, with twelve riders within one second. Chaz ends the session with the hard tyre, improving the Best Lap of Saturday’s race by about one second.

Shortly before the Superpole Race, the asphalt is wet again with a light rain; on the grid the clouds open and give way to the sun. Almost all riders opt for the intermediate. As Rea flies, Chaz gets behind Toprak, trying to catch up on the riders fighting for the podium. He manages to keep pace with the group in front of him until half race, but unfortunately he doesn’t have the opportunity to recover and get closer. In the final laps the number seven picks up his pace, trying to save energy and strength in his shoulder in view of a long and hard-fought race 2.

Race 2 starts in dry conditions, everyone with slicks, despite a few drops of rain on the third grid of the weekend. Chaz has a complicated first lap, not finding the right space in the first two corners, despite a good start, thus passing through the second sector in fourteenth position. After the first lap he manages to make a significant change of rhythm, in a few laps he overtakes Locatelli, Bautista and Rinaldi and sets off in pursuit of Haslam. He takes him and overtakes him, managing to make a super lap of 1.28.770, faster than the riders fighting for the podium. The first group is now far away and there is no possibility of jumping in battle with them, but the perseverance and tenacity shown really give us hope for the next races. He thus concludes in seventh position, with a clear comeback on Lowes and Van Der Mark, respectively sixth and fifth at the finish line. An unexpected result before the weekend and after the effort made in completing yesterday’s race. And with a stronger first lap, the Team could have fought for the top 5!

We cannot be too much happy for a seventh place, but considering the physical conditions, it is a great result that pushes the Team for the continuation of the season. In three weeks it will be time for the fifth round of the season, in the Netherlands, TT-Circuit Assen, July 23-25!

Chaz Davies (Rider):
“I am really happy with Race 2. I felt physically better on the bike, still struggling, but definitively, at least, had enough to be able to fight till the end of the race, which was what it has been missing in yesterday race and a bit even in the Superpole Race this morning. I am happy with our road, I had a few comments after the race, that maybe if I was physically fit a little bit better earlier in the weekend, I would have highlighted it a bit earlier. I think we did a good job, we had a good salvage of the weekend, considering our situation. It is positive as an anticipation of Assen!”

Denis Sacchetti (Team Manager):
“From the outside, one might think that Chaz didn’t have a good weekend here in England, but considering his physical condition, combined with the difficulties encountered by the Panigale on this track, he did a half business! Scoring these results, concluding the three scheduled races, battle, with a painful right shoulder, not all riders would be able to do it. Moreover, this track is perhaps one of the worst for the right arm, because it is very physical and with many right-handed curves. We come back home happy, not satisfied, but happy and motivated. The team is working well, reacting to these difficult moments is a symbol of a strong and united team!”