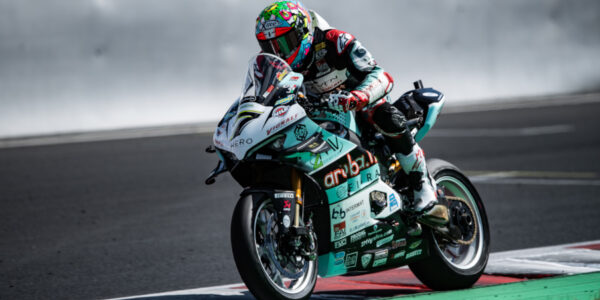 Two races coming back, after two bad starts. The script was similar in the two races on Sunday. The disappointment is great, especially for Race 2, where the pace was in line to fight in the top 5, but a crash in front of him in the first corner forced Chaz to go on the gravel.

The Warm Up takes place in good weather conditions after the rain that fell in the night. Due to the cold asphalt, Chaz uses a SC0 at the rear, which allows him to do several laps at a constant pace, coming within a few tenths of his personal best lap recorded in Superpole.

Superpole Race; the 10-lap race on this circuit is even more complicated for those who start from the rear. There are few overtaking hotspots, and with such a narrow “S”, a lot of time is lost at the start of the race. Chaz starts badly, he is even twentieth on the way out towards the first sector, then sets his pace and recovers six positions, with as many overtakes, in 8 laps. He finishes in fourteenth position, outside the grid inversion for Race 2.

Race 1 starts with the “usual” hope of a comeback. Chaz starts well and manages to find a good position in the bottleneck of the first corner with 4 positions recovered. The pace is in line with a Top Ten result, but unfortunately on the fifth lap the crash of Lowes in front of him, forces him to touch the brake in the middle of the turn, the damaged asphalt of T 1 betrays him, and he ends up on the ground. No consequences for Chaz, nor for the bike, just a great regret for not having finished the race, on a day in which many riders, even some at the Top standings as Rea, crashed, sliding on the treacherous asphalt of the Czech track.

The comeback ambitions of Go Eleven and the Welsh rider in Race 2 essentially end on the first lap; Bassani and Delbianco crashes, Chaz and other riders are forced to go into the sand to avoid them, losing contact with the group. Finally, Chaz does not lose heart and begins the comeback by riding on the high 33, in line with the top 5. In each overtaking, however, he loses more than a second, precisely because of the few opportunities that the Most track offers. Towards the middle of the race he finds himself in the points, chasing Rabat and Nozane.
A few steps from the end he makes two excellent attacks and ends his race in twelfth position, still printing a 33.8 on the last lap.

Chaz Davies (Rider):
“It was a difficult weekend, in the Superpole Race I got a terrible start, then I was in the pack. I found quite difficult to overtake here, so it compromise a bit the race. Anyway my pace wasn’t fantastic. In the last race, again, not a good start, I saw a big crash on the inside of me, right in my direction in turn 1 from Bassani. If I didn’t lift the bike I would have had a contact with him on the ground, so I went on the gravel with someday else and I was obviously really far behind. The pace was better, probably the best of this weekend and I found a little bit more rhythm in the second race. I felt that the bike improved a little bit, but it still didn’t feel easy. At the end of the race our laptime wasn’t so bad, I think we could have shown a little bit better without the first corner incident. For sure it has been a not easy weekend!”

Denis Sacchetti (Team Manager):
“Today we were able to take a step forward, at least in terms of the performance of the bike. When you start from behind, the chances of being involved in contacts or crashes is much higher, and today the accident at the first corner take us out of the game. Chaz still managed to do a good race, he is a hound, but we have to find the solution to be more effective with the qualifying tyre, this is fundamental for the next races. Now there is Navarra, in the tests we had good feelings, and the desire for redemption is strong in each of us!”