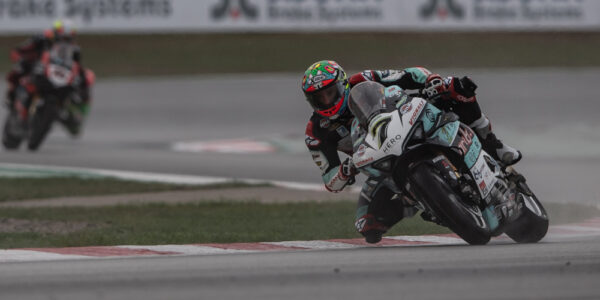 The weather, once again as expected, influences the Superbike on the Catalan track. Chaz Davies fights and wins the Top Ten at the end of a difficult race, finding the right confidence only in the last laps.

In the morning, the Go Eleven technicians made some changes to the set-up of the bike, in order to find more grip at the rear. After a few laps with the hard tyre, he comes back to the box to do some small changes. Out the SC0, on the soft 557, and he is back on track for anytime attack. The improvement is remarkable, and despite being just out of the top ten, the gap is very little, giving hope for the race.

Superpole is the most delicate session for Chaz and Team Go Eleven. Often, all the season long, the Welsh rider was unable to take the most out of the qualifying tyre. Al Montmelò Chaz immediately manages to lower his best time considerably, but unfortunately in the second and fourth sectors, he shows some difficulties and is unable to enter the first two rows. At the end of the session he is thirteenth, a few tenths from the first three rows. The number seven and the light-blue Ducati are called to a decisive comeback in the race.

Just before race 1, the rain decides to shuffle the cards in play; all the riders put on the Rain tyres and get ready for a wet race. In these conditions it is always difficult to make predictions, because the conditions really change lap after lap. Chaz, in the first five laps, does not feel comfortable and also takes risks from the rear, riding quite slow and losing many positions. From the middle of the race onwards he definitely changes pace, setting a strong pace in line with the Top 5 and starting his comeback. The gap is wide, but slowly close it and overtakes the riders in front of him. In the last lap he attacks three riders, conquering the final tenth place. A race in pursuit, lost in the first laps; On the positive side, Go Eleven recovers six points in the Best Independent rider standings, now at -27. For tomorrow, the hope is that the weather conditions will be better and that we will be able to recover some positions in the Superpole Race immediately, to fight with the best in Race 2.

The congratulations of the day go to Ducati, the Motocorsa and Aruba.it Racing teams and their respective riders; three Ducati on the podium have not been seen since 2012, GOOD JOB GUYS!

Chaz Davies (Rider):
“It was quite difficult in the race! We were all thrown into the race without any practice laps in the wet. I didn’t feel comfortable in the first half of the race, I didn’t feel like I really understood the bike, I wasn’t relaxed and, in the rain, that’s the first thing you need. I felt like I was riding a little bit tense, and, as the race went on I felt better and better and in the end I could also make some good move in the battle. In the first part of the race I was having so many moments from the rear which was causing me to question if we have the right set-up, and then, as the race went on, it came to me a little bit, the pace got better and I managed to come through and catch the group and get to the front of the group. That was satisfying, I was happy to make progress during the race, but I just lost too much in the first part of the race to bring home a decent result. In any case I think we didn’t put everything together to have the best package today, but I was pretty happy with the last laps. Let’s see what tomorrow brings!”

Denis Sacchetti (Team Manager):
“Today we weren’t able to do the race we was aiming for, Chaz found the feeling with the bike only in the last laps. From then on he was good, he recovered many positions in a short time, and we gained points over Gerloff for the Independent standings. But the other Ducatis went to the podium and our goal is to fight with them. Unfortunately in the wet the feeling with the asphalt conditions counts a lot, and today we didn’t find it until halfway through the race. Tomorrow there are other two races, hopefully dry, so we can understand what our real potential is!”