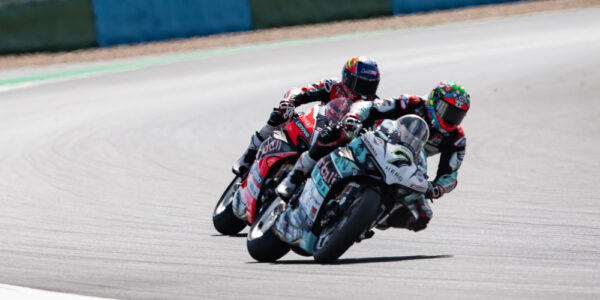 TOP 5 END OF THE WEEKEND, TWO IN A ROW BEST INDEPENDENT TEAM!

A great Sunday, that of Team Go Eleven and its rider Chaz Davies, achieving the goal of the best Independent Team in all the races of the weekend and finishing Race 2 in fifth place.

In the Warm Up, the first session of the morning, Chaz goes on track with the SCX at the rear, to evaluate the race pace in view of the Superpole Race. Since first laps he has a good feeling with the Ducati V4-RS, proving to be fast and in line with the leaders.

Superpole Race, in the middle of the morning the asphalt rises by degrees, but it is still not so hot as to guarantee the maximum performance of the softer tyre. On the grid, Chaz chooses the SCX, going against the trend with the choice of riders in the first three rows. The Welshman starts well, but is then pushed a lot inside the Adelaide hairpin, thus not being able to take advantage of the best line possible. In the first laps he is immediately aggressive, fighting and overtaking Sykes and Mahias. In the comeback he finds himself fighting with Rinaldi, the two riders “from Borgo Panigale” exchange positions several times, but the Welshman wins. At the end he manages to stretch chasing Bautista, passes Haslam and then concludes in eighth place. One row better and three positions gained compared to the original grid. The race pace was in line for the Top 5, to stay with Locatelli, but the time lost on the first lap did not allow us to fight with him. All postponed to Race 2!

In Race 2 the heat is really high, with temperatures around 30 degrees in the air. All the front riders opt for the 557, the same one used yesterday in the Main Race. Chaz starts well and manages to maintain his position during the first lap. From the start he feels much more confidence on the front, so much so that he immediately overtakes the two Honda HRCs. On the third lap he conquers the position on Rinaldi and sets off in pursuit of the Van Der Mark-Locatelli duo. Davies sets his fastest lap at 37 and a half and closes the gap created previously. Towards the middle of the race, the Yamaha Italian rider comes into contact with the BMW rider, touching the Dutchman’s front brake, generating a great scare. Luckily they both remain on track, but Chaz manages to overtake Van Der Mark. From then on the chase begins on Locatelli, the two ride on the same pace, recovering almost two seconds overall on Redding. At the finish line Go Eleven is fifth, Best Independent team for the second race in a row, and capable of an excellent performance that relaunches Chaz among the protagonists for the season finale!

The next WorldSBK Round is Barcelona, Montmelò Circuit, in two weekends, where the three back-to-back races will begin: from Catalonia, we will move to Andalusia, Jerez circuit, to conclude the European races in Portimao!

Chaz Davies (Rider):
Good solid Race! I didn’t have the same troubles as yesterday, where I was struggling to stop the bike. To be honest I think it was because the group was a little bit less busy than it was yesterday. It helps when you can do your own things and ride the bike in the way that we know how. I tried to follow Locatelli, to look for an opportunity, but he was solid, he had a good pace and not making mistakes. I lost a little the ground with him and then I came back. At the same time we were catching Scott, so I thought “I let Locatelli set the pace” and in the last laps I tried to find an opportunity to pass, but I didn’t have much more than that. We suffered a little bit with grip, but the pace of our bike was similar to Scott, so I am happy with that!”

Denis Sacchetti (Team Manager):
“We are back in our positions after two negative weekends, we needed it and it must a good push for the next races. The team worked well for Race 2, managing to solve the problem of yesterday’s race, and Chaz gave his best with two excellent performances, without making mistakes and collecting the maximum result. Analyzing the race, we discover that in both races today, from the third lap, to the finish line, our gap with the third classified has always been shortened, and this means that the we have been out of the podium battle due to the grid position. On this track the gaps were really close, so much so that taking a small gap, even just 2 seconds, it is almost impossible to recover it. I’m happy of what we have achieved here, and we go to Barcelona to reconfirm ourselves, and maybe aim for something more!”