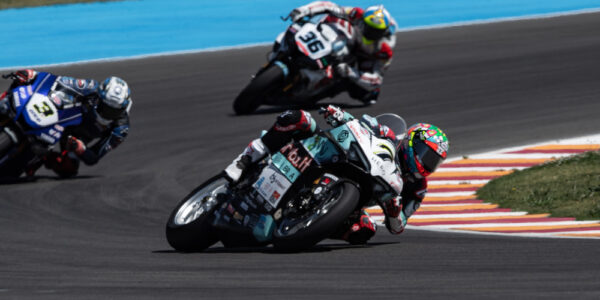 CHAZ SUFFERS THE PHYSICAL CONDITION, FINISHING JUST OUT FROM THE TOP TEN!

A difficult day today for Team Go Eleven on the San Juan track. The morning started with a technical problem that forced us to miss FP 3 almost completely, to then finish Race 1 in twelfth position, gritting Chaz’s teeth and finishing the race, despite being really proved at the arrival in the box.

The FP 3 were affected, in fact, by a mechanical issue with the engine, which forced Chaz to finish the session early on the track. Unfortunately, the problem occurred at the beginning of the session, thus forcing the Welsh rider to complete only one chrono lap in the thirty minutes available.

For Superpole, the technical problem was solved, and Chaz was able to take part to the session right from the start. The team, together with the rider, chose to compete in the round with the race tyre, the SCX, which, on this particular grip circuit, provided performance similar to the qualifying one. Chaz, in his best lap, turns on some excellent split times in the first two sectors, but then he lost something in the second half of the track. On the finish line he is thirteenth, fifth row. Not an optimal position for the start, but still the lap time is good, less than a second from the top, considering that the firsts took advantage of the Qualifying tyre.

In Race 1, Chaz unfortunately suffered from the lack of physical training in the last four weeks, as well as the bit of pain caused by the injury to his ribs, resulting in a not very constant race pace. After a complicated start, which saw him going back to the rear of the group, he slowly recovered to fight for the Top Ten group. The overtakings were difficult, however, with a condition that was not excellent. In some parts of the race, the Welsh rider was able to sign some excellent laps in line with the Top 5, but then he had to defend himself from the middle of the race onwards. In the final laps he managed to grab the twelfth position, at the end of the battle, won against Laverty. Definitely not a good race, but returning from an injury is never easy and already having finished and passed under the checkered flag is a result!

Tomorrow there will be two more exciting races from the WorldSBK circus; Chaz will have one night to rest, think about today’s race and tomorrow he will grit his teeth again to finish the weekend. Hold on Chaz!

Chaz Davies (Rider):
“It has been a difficult day, starting with the engine problem in FP 3, no laps this morning; then I felt a little bit strange at the beginning of the Qualifying, so I didn’t have time to put the Q tyre, which conditioned my starting position. At the start of the Race I had a problem with the clutch, where the bike was moving even with the clutch fully engaged, so we had a lot of small problems. Then I think the biggest thing that conditioned my Race today was my physical condition; it’s not pain, just a general bike fitness. I really suffered like a dog, I know that actually my bike was capable of a much better result, but really I couldn’t do anymore from a physical point of view. I am a quarter of the man I was when I felt good; it’s disappointing to have to manage my race like this, to manage my energy level, but I am still trying to recover as best as possible. Anyway, considering the injury I had, it was not a guarantee to be here, so we are here, we finished the Race, of course it’s easy to be disappointed, but in the end we saw the chequered flag!”

Denis Sacchetti (Team Manager):
“Our race today may seem colorless from the outside, but Chaz has just returned from injury, he hasn’t been training for a month. Then you can imagine the pains his ribs cause. I’m proud of him. he managed to finish the race and this is our restart point. Unfortunately today we were not competitive for the positions that matter, but in some laps he proved to be fast; keep the pace of the others when you are not at 100 % physically it is not easy. We will take advantage of this weekend to be ready in Mandalika, for the last Round of the Championship! ”