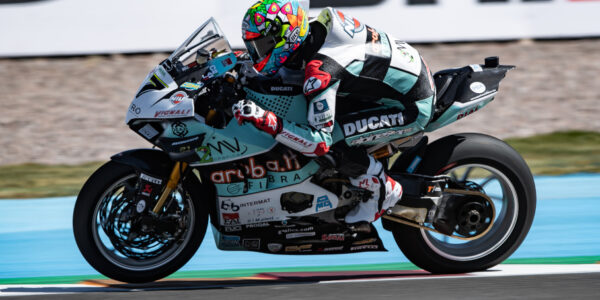 DAVIES GIVES HIS ALL AND CONQUERS A NINTH PLACE, HALVING THE GAP COMPARED TO RACE 1!

A growing Sunday for Chaz Davies and Team Go Eleven. A bad start affected the result of the Superpole Race, but in Race 2 he was able to grit his teeth to the end and defend his position in the Top Ten, proving to be faster and more consistent than on Saturday.

In the Warm Up, which took place in cool conditions, with only sixteen degrees in the air, Chaz had a good start setting several laps on 38, finishing in seventh position. A nice start to the day that gave impetus to the whole Team, showing that the welsh rider could have had something to say in the two races.

In Superpole Race the start influenced the result, negatively; after the first corner the Welsh rider was at the back of the standing. From then on he tried to come back to enter the top 9, and take advantage of the grid inversion, but in just 10 laps he was unable to achieve more than a thirteenth position. Certainly not a good result, considering the pace shown, but at least he gained more confidence in view of Race 2.

In Race 2 Chaz started from the twelfth box, finding himself inside the first corner, due to the missed start of Alex Lowes, caused by the hand injury. On the first lap, the Go Eleven rider maintained his position and immediately overtook two opponents, showing himself to be more aggressive and faster than yesterday’s race. After the first ten laps he feels a bit of physical fatigue and discomfort in the ribs, but still manages to get into the fight with Gerloff and Haslam. He passes both of them, throws himself in pursuit of Locatelli, but at the end he has to give way slightly. Gerloff overtakes Chaz again, but Davies manages to defend himself well from Bautista’s return. Thus ends in ninth position, with a gap halved from the first compared to Race 1. A race that gives a good spirit in view of the last round of the season, in Indonesia, in about a month, when Chaz will have recovered completely from the injury!

WorldSBK is preparing to face the last Round of this long and exciting 2021 season, on a completely new circuit; the Mandalika International Street Circuit, from 19th to 21st November, will be the scene of the World Championship challenge. For Chaz it will be the last race before ending his career, Team Go Eleven will do everything to give him the possibility to show his best and leave a good memory to the fans!

Chaz Davies (Rider):
“This morning the feeling was a little bit better than yesterday, physically I mean. So, I was able to go quite fast for a couple of laps, but I still had to manage the races. In Superpole Race, I found myself on the outside in Turn 1, as a consequence of the grid position, and basically I got taken a little bit wide and I wasn’t in a good position. My pace was good at the end, and I felt OK with the bike, but I was way too far back. Then we made some small changes for the second Race, with Alex Lowes out of the starting grid, we moved up a grid position and this was much better. I have been on the inside instead of the outside, and this made a big difference to my first lap. My start wasn’t great, but I was still with a good group at the beginning. At one point I thought I might go to catch Locatelli, but then I was more than empty, I put everything into that. I really suffered physically, but I am satisfied with the job that we did, satisfied with how the bike felt, I know it’s capable of more, but with the physical limitations, that’s our pace at the moment. I think we can be quite proud of that ride and thanks to the Team, to all the guys, and I am sorry of not feeling a little bit better and giving a bit more, but now we have a few weeks break, This is a good opportunity to come back fit again!”

Denis Sacchetti (Team Manager):
“Chaz was really empty at the end of the race, he did his best and put his all into it…when we hugged in the Parc Fermé I realized that he really put his heart, beyond the fatigue and beyond the pain. It’s really good to see a rider that, after announcing his retirement, still give so much and suffer for our sport. Now there are 4 weeks before Indonesia, he will have time to get back to training and be 100% for the grand finale. We are really excited and we can’t wait to Race in this new circuit”