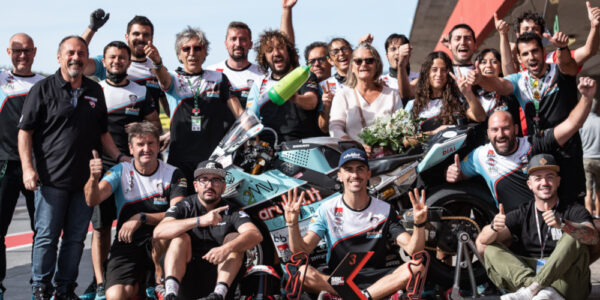 IS IT A DREAM or IS IT REALITY?

Three podiums in three races, three different conditions, but Loris is always on the podium. In Superpole Race in the wet, in Race 2 in the dry and after a hard and long battle. WHAT RACES, WHAT A HEART!

In the morning, upon awakening, the Portimao track was wet, with a light drizzle, that lasted until the Superpole Race approximately. In the Warm Up Loris was able to test the Ducati in the Superbike version with rain for the first time. He immediately felt at ease, showing himself very fast from the first laps. Towards the end of the session he slowed down his pace to avoid further risks, considering times are really closed to the beginning of the Superpole Race!

Just before the Superpole Race, the sun comes out over Portimao and the track begins to dry. Too much water on the track, again, and all the riders start with the Rain. Team Go Eleven and Loris Baz choose soft tyres; the French rider immediately starts strong from ninth on the grid and overtakes a couple of riders in the first corners. On the second lap Michael Rinaldi crashes right in front of Loris and to avoid him, he loses two positions on Gerloff and Bassani. From then on the comeback begins, attacking Locatelli, Bassani, Gerloff and Haslam. Once in third position he tries to catch up with Scott, but the two were on similar times. In the end Haslam comes back closer to Loris, using the hard tyre, but just as he attacks Loris, the Englishman loses the front of his Honda and ends up on the ground. Baz ends his race in third position, putting him in the front row for Race 2!

In Race 2 Loris starts from the front row, thanks to the podium obtained in the Superpole Race. A few moments before the start, a problem with the traffic light forces the riders to delay the start. Tyre warmers on, 3 minutes of waiting to fix the problem and starts again with the starting procedure! Loris had a bad start, then in the first laps he didn’t trust the tyres too much, fearing that the minutes of waiting on the grid (where, it is not allowed to enter with the generators) had cooled the Pirellis too much. Furthermore, the wind was much stronger and more annoying than yesterday, so much so that it caused a lot of movement on the Ducati V4-RS. Little by little, with the laps going on, Loris found more and more confidence and, from eighth position, he came back with great strength. He even set a lap under 42, which pushed him in the slipstream of Locatelli, recovering almost a second per lap on the Italian. On the thirteenth lap, in turn one, he overtakes Locatelli, but Bautista manages to pass both of them. Loris and Alvaro overtake each other several times in the last laps, until they come in contact in turn 5; the Spaniard goes down and Loris finishes on the podium, again!

A dream, this weekend in Portimao was a kind of dream, both for the Go Eleven team and for Loris Baz, who arrived from America without expectations, and found himself on the podium three times with stunning races and battles. Amazing what he did as a substitute rider, with just one race to adapt, in Jerez.

Today anyone has realized who he is and what Loris can achieve, if put in the right condition, and more than anyone else he deserves a saddle in the World Superbike Championship!

Loris Baz (Rider):
“It seems like a dream, an incredible weekend! In the wet this morning I did a good job, but I think the soft choice at the rear was wrong. I still managed to get on the podium, though! I had a lot of fun in Race 2, the team did an exceptional job to try to give me a better bike than yesterday, one that took advantage of the grip much more. That’s a pity, I lost a lot of time in the first few laps, but I didn’t know what to expect after being 5 minutes on the grid without a generator. I also got a bad start, Van Der Mark’s bike was smoking and I didn’t want to stay in the slipstream. But I knew I had a good pace, I tried to stay calm and come back without making mistakes. In the end, Alvaro and I had a good battle, I am sorry for the contact at the end, I apologize to him, but it was a tough race, I also had contact with Rinaldi many times; that’s racing! Thanks to Ducati, Go Eleven, everyone who allowed me to show that I have the potential to stay in this paddock! ”

Denis Sacchetti (Team Manager):
“I have few words to describe what Baz and the team have done in just two races, they have been super! I think no one expected these results, from a rider who makes a substitution and who used different tyres in his championship. Three podiums in one weekend, in both dry and wet conditions, is magic! This is the result of motivation and hunger for results, as well as a very fast learning speed. What happened in Race 2 with Bautista, I think is a normal race accident, Alvaro went wide to pass Loris and Loris crossed the line on the inside. On the way out there was a contact because Alvaro was trying to return on his line. Honda made a complaint, Team Go Eleven, too, now the FIM will make a decision. We are enjoying these results for the moment!”

UPDATE: The result of Race 2 is still to be confirmed following the complaint, made by Honda Racing Team and Team Go Eleven.

The update does not change anything in the magical weekend experienced in Portugal; the decision of the race direction must be respected, whatever it is. The hope is that the same standard will be maintained also in future decisions!