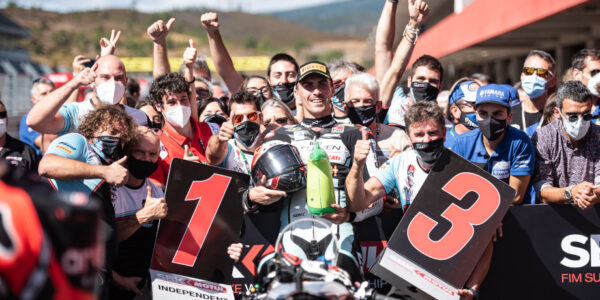 LORIS GETS A THIRD PLACE AT HIS SECOND 2021 WORLDSBK RACE!

What a day for Go Eleven, what a day for Loris! An unexpected podium (at least before FP1) at his second race in the 2021 World Superbike!

Starting from FP 3, the race pace shown was excellent, the feeling improved lap after lap, keeping the drop of the rear tyre under control. The low temperatures, however, risked to change the values in the field, providing not too precise indications on the behavior in view of the race.

In Superpole, Loris immediately struggled to adapt to the Pirelli qualifying tyres, which were different from those of last year. With both attempts he took a few corners to understand the reaction of the bike, especially in the first sector, where he left almost half a second. At the end of the session he finishes in ninth position, third row, about a second from the pole! It’s a regret not having found the perfect lap that could have guaranteed the second row, but still not a bad position in terms of the race.

Race 1, race 1 was one of the most exciting of the last years of the Superbike World Championship. Close fight for all the top positions, hard breakings, twists, and “old style” one-on-one. Loris did an incredible Race; starting well keeping his position, he started in pursuit of the group for the podium. In the first few laps he tried to save the tyre, with clean lines, then, from the middle of the race, he started his comeback. First on Gerloff and Locatelli, then he enters the fight between Haslam and Rinaldi, managing to pass them both in turn 1. From behind comes strong Bautista, who manages to put himself in third place and sets the pace, closing the challenge for the podium between himself and the Go Eleven Frenchman. In the last two laps, the two overtake each other several times, but in the end, in turn 15, the Honda Spaniard loses the front and crashes. Loris concludes third, with an aggressive race, always on the attack, proving that he already has the V4-RS in his hands. It’s only the second round, the third race on the Ducati Go Eleven, but he seems to know it perfectly. What a ride, Loris!

Tomorrow, two more races available, in Superpole Race it will be complicated due to the starting position from the third row, but in Race 2 there will be plenty of time to recover!
And probably on the Portuguese Sunday the weather could change everything, especially for the first sessions. Let’s see what happens in the Portimao roller coaster!

Loris Baz (Rider):
“What a beautiful day! So far it’s a really nice weekend, like Jerez, but slowly I get used to the bike more. We went strong in FP 1, FP 2, FP 3, then after qualifying I was angry with me because I didn’t show the potential of the Q. A little bit I expected it, however, because these tyres are new and it takes a lot of kilometers to understand the reaction. The third row was my best, but I knew I had an excellent pace in the race; I tried to save the tyre as much as possible, but, even keeping something in my pocket, I was able to comeback. I had so much fun. Then Alvaro came back and we started a good battle; I was stronger in the second and third sectors, he in the first and fourth, but he took many more risks, often closing the front. On the last lap I passed him, then he passed me again and closed all the lines well; I then tried to make him feel the pressure and the engine on him, and in the last corner he went long and closed the front. It is truly a beautiful podium, I am happy and I thank all those who have allowed these two races; the Go Eleven Team, Ducati, the whole team in America, which for sure is following me. I’m happy to do these results here with my friends, my family … and tomorrow we’ll try again!”

Denis Sacchetti (Team Manager):
“For me it is a magical week, I became a dad and Loris gave us a fantastic podium! A podium that comes at a moment that is too important for us, this year is the second one and for an independent team it is so much! Baz had fun, he has created a great atmosphere inside the garage, he laughs, jokes and works methodically, focusing on specific aspects and improving them every time he gets back the bike. He works a lot on himself, a skill that you only find in champions rider, and to be already at this level on the second weekend means to have a remarkable ability and speed of learning. He is really good, and I think he surprised a lot of people in this “holidays” as he calls it!”
SATURDAY PICS (By Luca Gorini): CLICCA QUI