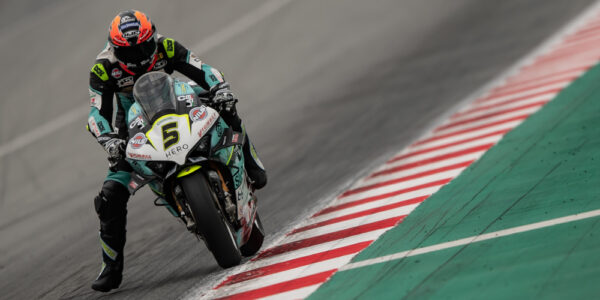 RACE PACE WORK FOR OETTL DURING THE TWO-DAYS TEST AT MONTMELO’!

Last unofficial test for the Superbike riders, held on 25-26 March on the spectacular Montmelò track, just outside Barcelona! The Catalan track hosted all the main protagonists of the 2022 season of the WorldSBK, thus increasing the interest and direct comparatives among the opponents. During the two days, however, the weather changed the teams’ plans, with the rain coming at the middle of Day 2.

During the first day Philipp Oettl and the Go Eleven team had an intense day full of tests and technical innovations. After a morning dedicated to the setting of the electronics, the Piedmontese team was able to concentrate on the race pace, carrying out three long run simulations. Philipp was quite at ease in the seat, always remaining on fast and constant times, providing precise feedback regarding the new features installed on the light blue coloured Ducati V4-RS. Towards the end of the day there was also time to make an attempt with the soft tyre, not fully exploited, with still a bit missing in the second and fourth sectors. However, a good first day, which ended with the German rider in thirteenth position about half a second from the top 5.

On the second day the riders all took to the track at the opening, in order to take advantage of all the time available before the rain stopped the possibility of improving the times, around 12.30. Philipp was able to make some comparisons with the previous day, then trying to improve his best time with a soft tyre. For the first time he managed to ride below 42, stopping the clock in 1.41.735, a really great lap, around the second from the top. In the afternoon the wet track allowed the German rider to use Rain tyres for the first time, completing several laps to find confidence in wet conditions; remember that this is the first time ever riding the big superbikes on wet!

Finally the last unofficial test before the season has come to an end, now it’s time to focus on Aragon, for the season opening. The WorldSBK riders will carry out another two days of testing on April 4th and 5th, Monday and Tuesday before the race, and then open the 2022 season between April 8th and 10th, right at Motorland!

Philipp Oettl (Rider):
“During the first day we tried many new technical parts; Spark exhaust, brake system, different kind of anti spin. We did also many laps in race configuration, we did many long run. Towards the end of the day, we found a small solution that helped me a little bit with the edge grip. In the second day we did one step more with the engine brake, then we tried a little bit more on the set-up; we found our direction and a good improvement, immediately, by half a second, with used tyres too. I think this is really good. Barcelona was a completely different track compared to Misano and Portimao, with a lot less grip, it was really difficult, but I think we found our way and a good solution. Now I am really happy looking forward to Aragon, we will have test there and then the start of the season!”

Denis Sacchetti (Team Manager):
“It was a very productive 2 days of work here in Barcelona, on this track we were able to work on different areas compared to the first two tests. We concentrated on improving the bike in the long corners, and on the electronics settings, trying to sew it as much as possible to Philipp, based on his riding characteristics. This morning we improved our time trial although the track conditions were worse, but what matters was the feeling of the rider, who is more and more at ease with the Ducati Panigale. In the afternoon it rained, and we took the opportunity to introduce Philipp to the Ducati Panigale V4RS in the wet. Here in Barcelona there were almost all the Superbike teams, it was nice to ride all together, and we saw that the level of the championship is really high, 80% of the riders are very fast, very small gaps between the first and the fifteenth, and also the level of the teams is always higher. It will be an exciting and hard-fought championship!”