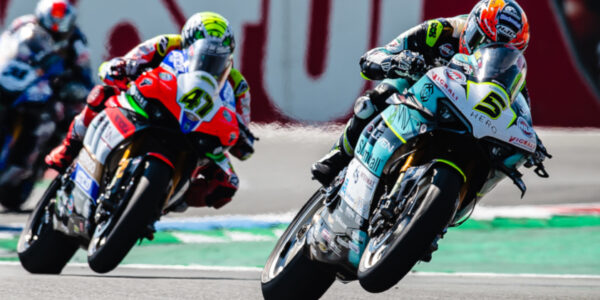 WHAT A DAY FOR PHILIPP OETTL IN ASSEN; FROM A SMALL “FRUSTRATION” CAME OUT A SUPER RACE 1!

Super performance for Philipp on Saturday in Assen! After a qualifying that left a bit of disappointment due to a mistake in the last corner, when the split times threw him into the second row, the German rider was able to refocus before Race 1, then showing an incredible pace, which gave him the seventh final position!

In FP 3 Oettl started the session with used tyre, to test some electronics changes compared to Friday. Right from the start he seemed faster and more constant; then, it was time to put on the qualifying tyre, so as to better prepare for the Superpole. An excellent lap, with amazing split times in the second half of the TT Circuit, put him in third position, just a few tenths from the top. A nice start to the day that energized even more the rider number 5.

In Superpole the Go Eleven Team knew they had the speed to fight for a great result, considering that Philipp is a rookie in the category. This session, however, is always as delicate as it is important. With the first SCQ he printed a good laptime, valid for the temporary eighth position, then, after a quick pit stop to change tyres, he went back on track alone to attempt the final time attack. In the first three sectors he made all the staff of the Italian team dream, with split times that threw him in the second row, but, unfortunately, at the final chicane he lost the front, managing to save the bike with great skill; Unfortunately, even the lap after was gone, as he would not have had the speed to improve his Best! Eleventh position, therefore, fourth row for Race 1 and Superpole Race; a huge shame for what would have been a great lap, but the speed is there!

In Race 1 Philipp started relatively bad, losing five positions at the start. In the first laps he remained closed in the middle of the group, immediately taking a bit of a gap from the top ten. After seven laps behind Vierge, a rider who is always very difficult to overtake due to his hard braking, he managed to get rid of the HRC rider, setting off in pursuit of Gerloff, Redding, Mahias and Bassani. With a couple of personal fastest laps on the 35.5, he jumped into the exhausts of his opponents in front of him, then managed to overtake them in a very short time, with great braking and line changing, especially at the famous “Turn 15”, one of the most critical corners of Assen. Once overtook Redding, Philipp was able to launch in pursuit of the duo Baz and Lecuona, with the French rider first of the Independents. Although the Go Eleven rider recovered almost half a second per lap, unfortunately the race ended before Oettl could enter the battle. A stunning pace, perfectly in line with the Top 5, allowed Philipp to make twelve overall overtakes during the race, recovering up to the seventh final position; a result almost beyond the best expectations for a Rookie, in the second overall race in WorldSBK! The smile once he got off the bike could also be seen through the visor … and tomorrow there are two more races to take home!

Philipp Oettl (Rider):
“It was an interesting Race! I tried to keep calm from the beginning, because in the first laps I didn’t have such a good feeling with the bike. Then when I overtook some riders, I could ride free and the pace was amazing, also my riding style was better than in Aragon. We made a great job, the team made a great job, we worked through the winter in this direction and it is the right one. It’s the good way for the future too. Now we analyse all the datas, to understand where we can improve and what to keep for tomorrow. The goal for tomorrow is to do something similar to today, maybe with a much better start! We will try some new start configurations, because today I fought I had a good start, but then in Turn 1 I lost too many positions. Today the riding was good, it was strong, we reduced the gap by 7 seconds closer to the winner today, I am really happy!”

Denis Sacchetti (Team Manager):
“It was a very positive day, because in qualifying Philipp was doing a super lap that would have placed him in the first two rows, then unfortunately he made a mistake at the penultimate corner. Being already fighting for the top positions with a Rookie, it’s something important and that loads us even more. In the race I think we did a great job; the race pace was very fast, unfortunately the start penalized him a bit in the first laps, where we lost contact with Lecuona and Baz and the fight for the Best Independent. Today we were really close to the first Top Independent, but anyway it was still a great result. First Top Ten, it was our first target of the season and we reached it in the second race, that’s fantastic. Now we have to keep working, we still have to improve and we hope to have fun tomorrow as we did today! ”