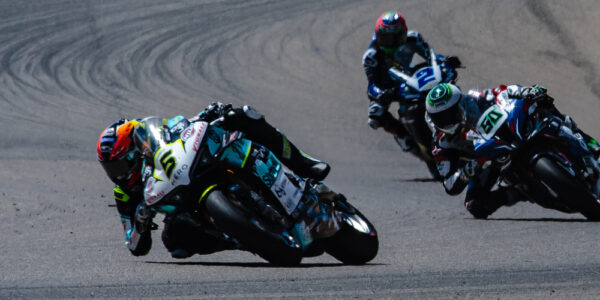 Final day in Aragon, a good debut weekend for Philipp Oettl and the Go Eleven Team! After a Superpole Race with a few mistakes, the German set an excellent pace in Race 2, which allowed him to fight in the second group.

The Warm Up allowed Philipp to regain confidence with the Ducati Panigale on used tyres, slightly lost yesterday in the final laps, when he gave his opponents a couple of seconds. It should be considered that many opponents started with new tyres, immediately riding fast, while Oettl had to struggle with the low grip generated by the rear tyre with 14 laps.

The Superpole Race was a complicated race, but really useful for Philipp to understand the tyres and the behavior of the bike in battle. The Go Eleven rider, together with the technicians, opted to race with the brand new SCQ, the qualifying soft. A risky choice, but which proved to be quite good. Perhaps he did not provide the advantage that could have been expected at the start of the race, also thanks to a bad start that caused him to lose six positions, but it was constant throughout the ten lap distance. Unfortunately, in the middle of the race Oettl made a mistake, going wide, while he was returning to fight for the Top Ten, thus losing several positions. He probably wouldn’t have entered the nine (the only positions that give points) at the end of the race, but the pace was very good and fast, so much so that he managed to pass four riders in a couple of laps.

Race 2 turned out to be decidedly more positive and consistent than Saturday’s Race 1. After a not perfect start, which saw Philipp pass in seventeenth position at the first corner, he was able to quickly recover a couple of positions, entering the points area and trying to close the gap taken in the first laps by the group fighting for the Top Ten. The pace was good, practically the same as the Honda HRC riders and Loris Baz; here in Aragon from seventh to fifteenth all the riders were fighting each other and a few tenths per lap could really make a difference. Unfortunately when you start back it is difficult to recover, but Oettl was able to grit his teeth even in the final and finish in thirteenth position. Today the technical staff and all the members of the Team were quite happy with the performance of the number 5 rookie, as he showed good growth and greater stability in the 18 laps of the race. An overall debut in the points area, close to the Top Ten, without errors or technical problems! It’s hard to hope for better on the eve, but the Championship has just begun!

The Superbike circus moves to Assen, in the cathedral of speed, one of the most beautiful and exciting tracks of the whole season! Two weeks of rest, just the time to reorganize thoughts and datas, and it will be time for Round 02, April 22-24!

Philipp Oettl (Rider):
“After the Second Race, I am much more happy than yesterday, because I could keep the pace longer. I think we learnt a lot during the Races. In the Superpole Race I did a few mistakes, but I had the pace to stay close to the Top 10. Overall I think it was a good race weekend, we did two times points in both races, so I think we can be quite happy with it. Now we will analyse the datas, and see what we can improve for Assen. We are not so far from the top ten, and we are at the first Race! The team did a good job, all the test and then the weekend we had no problem, we spent nice ten days together. I think we must be happy…by now!”

Denis Sacchetti (Team Manager):
“Philipp raced the Superpole Race and the 3 races at the weekend for his first time! I think it was a very positive day for us, we have finally discovered our starting level and we are even more motivated than before, because we have a very high potential and we could improve. The riders and bikes in this World Championship are all very close and very competitive, if you are not perfect it is easy not to get the result, but if you can take a small step, a small improvement, it is just as easy to make a significative step forward in the standings. Philipp works methodically and the bike is fast, the team is also in harmony and we have all the bases to grow solidly and have fun! ”