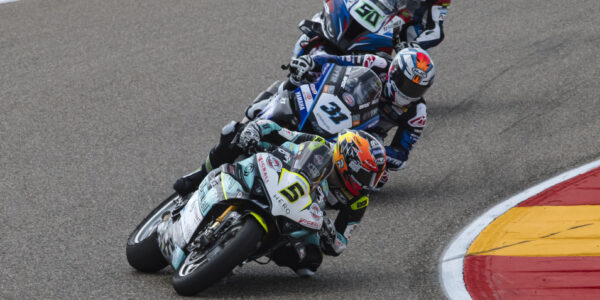 PHILIPP FIGHTS FOR THE BEST INDEPENDENT IN RACE 1, COLLECTING HIS FIRST POINTS!

What a race, what a start to the World Championship! Close fight for both the top positions and the Top Ten, in a track that never disappoints expectations! Philipp Oettl and the Go Eleven team collected the first championship points, completing an excellent race for a rookie, but which leaves a bit of a bitter taste in the mouth.

The morning started in the best possible way, with the German rider who faced FP 3 with great determination to better prepare for qualifying. After a few laps with “really used” tyres, he returned to the pits to switch to the new SCQ. As soon as he was on the track he started to push, completing a super-lap under 50. Fourth place in the session, sixth overall of all free practice sessions. That was really a big step forward!

In Superpole, the very first decisive sessions of the weekend, Philipp used two new SCQs on the rear; with the first he set a good time, but not exceptional, slower than in the morning. Then with the second he made full use of the extra grip provided: 1.49.636, fastest time ever for Oettl at Aragon and fourth row conquered, just behind format specialists like Baz and Gerloff. Upon returning to the pits, the 26-year-old from the Go Eleven Team said he was satisfied, but not very happy; a sign that he felt he had good potential back in his hands.

In Race 1 Philipp felt all the excitement and tension of his debut in the highest category. On the grid, as he was looking for concentration, you could see his eyes charged and determined. The race did not start in the best way, after a good start, he stay closed in Turn 1, passing through the first intermediate eighteenth, losing six positions. Very quickly he began overtaking, and after having put a small gap to Mahias, he set out in pursuit of the Top Ten. Lap after lap, tenth after tenth, he closed the gap on Gerloff, Baz and Laverty, managing to attack too. At the end of the race, after a small mistake in the fight with the Irish, he lost his concentration slightly, losing his pace in the final laps. An ending that leaves a bitter taste in everyone’s mouth, when you feel the chance to fight for the Best Independent, then it goes away, it is normal to be slightly disappointed; but if you think that this is the first race, the starting point is more than excellent. We must continue like this because there are two more races tomorrow!

Philipp Oettl (Rider):
“I think it was a solid day. We started in a really good way, being sixth overall in the FPs. With the Q I managed to find a good grid position, in the middle of the group in twelfth position, which it was not so bad. Then, the first Race it was not so easy, but I learnt a lot. I better know for tomorrow what I should do different, but now it’s important to work with the team and give them as many infos as I can. Tomorrow we can do another good long Race, I am curios for the Superpole Race, I need to be a bit more aggressive with only ten laps!”

Denis Sacchetti (Team Manager):
“Today it was a positive day, in qualifying Philipp managed to do 49.6, I think it’s an incredible time for a rookie rider in Superbike here in Aragon! So speed is there! He showed it in the race too, his pace was very good enough to fight for the Top Ten and the victory as an Independent. The final result was conditioned by an error at the first corner at the start and by the last 5 laps where we were not able to be constant, but for us today it was important to understand where we were, our starting point, and now we know we are already competitive and can fight for excellent results right away. This gives us great motivation!”