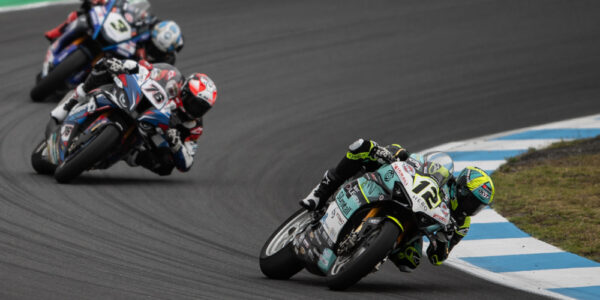 On Sunday in Estoril, Round 03 WorldSBK, the weather conditioned all the day; Wet Warm Up, Superpole Race in mixed conditions and Race 2 dry but with constant light rain. Xavi Fores got two Top Ten finishes, ninth in the Sprint race, tenth in the afternoon, proving to be fast, reliable and aggressive in all grip conditions.

The Warm up takes place on very wet asphalt, due to the rain that fell during the night. Xavi found a good pace from the start, looking comfortable on the wet track, improving lap after lap. He finishes in tenth position, without risking more than necessary in a not very useful for the result session.

In Superpole Race the choice of tyre is really a lottery; the track is drying, but several points are still very wet, especially in the last sector. The choice of Xavi and the Go Eleven Team was directed towards the intermediate, but just one minute before the end of the grid, the technicians and the rider opted for the rear slick. A choice that proved to be thew right one, with the Spaniard quickly recovering from the seventeenth position close to the Top ten. In the last two laps he still managed to improve a few tenths on the lap, overtaking Bassani, entering ninth position valid for the grid inversion in Race 2, and then finishing extremely close to Rinaldi. An excellent performance, which allowed Xavi to get a point and, above all, to start from third row in the Main Race.

Race 2 starts again with a few drops of rain along the entire circuit, but the asphalt remains dry and in good condition. Xavi does not have a perfect start and loses some positions, then in the first laps it is a bit difficult in adapting to the new set-up. With the drop of the tyre he finds more and more feeling, so much so that he settles on the high 37, thus managing to pass the BMWs and catching up on Vierge. In the last two laps he “eats” two seconds from the Spaniard from Honda, but closes behind in the sprint by thousandths. Another Top ten conquered, a solid and fast race finished less than twenty seconds from the leaders. A great performance for Xavi, it’s really good to see him back and so competitive in WorldSBK!

Three weeks to the next Round, home race for Team Go Eleven! Philipp Oettl will start his recovery path from injury immediately after the surgery, and the goal is to welcome him back to the track at Misano. The chances are good, but recovery times should not be forced because it is important not to worsen the condition of the collarbone.

Go Eleven would like to thank Xavi Fores immensely for his availability and for the great weekend spent together on the Estoril Circuit, in which the Spanish rider number 12 enjoyed making a lot of overtakes and finding excellent feelings on the Ducati Superbike. All the staff had a great time with him, a rider who puts his soul into every race and wishes him the best for his next engagements.

GET BACK SOON PHILIPP, THANKS FOR EVERYTHING XAVI!

Xavi Fores (Rider):
“It was a positive day, this morning the conditions were a bit difficult, in the Warm Up I rode for the first time in the wet, finishing tenth, but with a constantly improving pace. The feeling was good. Then in Superpole Race, the conditions were mixed; we were on the grid with intermediate tyres, the easiest choice was to keep them, but in the end I saw many riders change and on the grid we decided to put the slick on the rear. It was the right choice, because in the last laps I managed to recover and finish in the first nine, so to have a better starting position in Race 2. In the last one I started badly, as in the other races, I lost a bit at the beginning . We made some changes that I requested to the team, and in the first laps I didn’t feel strong; then I started to understand how to ride with that set-up and I was going well. I went through Redding and tried to take Vierge, but I couldn’t. I finished tenth, I expected more from Race 2, but given how the weekend went, since I missed Friday and everything, I’m very happy! I have to thank a lot the Team for the chance they gave me, I send a big hug to Philipp, I hope he recovers soon and that he can race in Misano!”

Denis Sacchetti (Team Manager):
“Xavi was incredible, he got on the bike yesterday morning and made results that no one expected. It was important for us to race this weekend because we were able to carry on the work on the bike, try some new features and have confirmations on parts where we have to work to improve. Today was a strange race because a light rain fell during the race and this made it difficult to find the right set-up of the bike, in addition to the difficulties of the rider on how much and how to push, but in the Superpole Race Xavi made another great effort, conquering the third row! We are happy with his contribution and we thank him heartily. Of course we missed Philipp, tomorrow he will have to undergo surgery and I send him a big good luck, we need him at Misano and we have to come back stronger than before!”