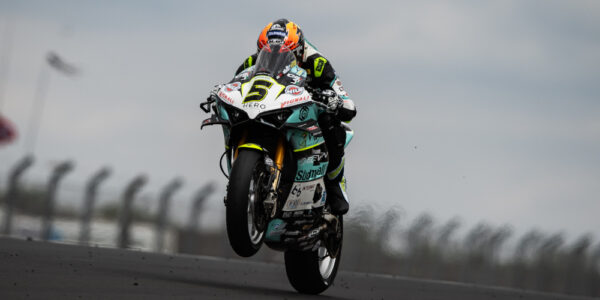 DAY 1, DONINGTON PARK; PHILIPP BECAME FAMILIAR WITH THE LAYOUT, WORKING ON THE LAST PART OF THE RACE!

Busy day for Philipp Oettl and Team Go Eleven on the amazing ups and downs of Leicestershire; the German rookie was on the track for the first time at Donington, and in a short time he had to regain confidence with the V4-R, find the right lines and the right set-up for the rest of the weekend. Overall, Friday was quite positive, with a lot of work done especially on used tyres (only two tyres in two session), and a good speed shown in the first three sectors, while something is still missing in the two final braking corners.

In FP 1 Philipp entered with the hardest compound available at the rear, with the aim of making as many laps as possible, to learn about the tricks of Donington Park, a track that is always difficult and complicated to face for the first time. For the whole session he placed himself close to the Top Ten, constantly improving the references and asking only for small set-up adjustments; the last sector is the weak point, the one in which the number 5 rookie has the most effort, especially in stopping the bike. These are two very slow first gear corners, where acceleration and good braking combine to characterize one of the most famous sectors of the entire Championship. Towards the end of the session, some protagonists tried a time attack, but Philipp preferred to finish the set of tyres he had at the beginning of the session.

In FP 2 the cyan-colored Ducati of the Go Eleven team entered the track with the SCX, a tyre that will probably be the best choice for the race; in the first laps, unfortunately Philipp made some mistakes, also often finding himself in traffic and was unable to complete a clean lap. The best time was obtained in the twelfth lap, practically halfway through the race, dropping below 29.0. Surely, using maximum grip, he could have been three or four tenths faster, but on Friday the time is not so crucial. On the final, Oettl did not want to change tyres, saving one for tomorrow morning, still running with excellent times in view of the final of the two “Main Races”. The last sector, once again, is a weak part, which the technicians will work on tonight today, as it is also one of the few overtaking hotspots here in Donington. The German rider, however, said he was satisfied with the work and his pace, not complaining of particular discomfort in his right shoulder, which is a good feeling for the weekend races.

Tomorrow, it is already time for the most crucial session of the weekend; the Superpole! Here in Donington especially, a good qualifying could be the anticipation of an excellent race; as always, however, a few thousandths will make the difference between one row and the other … so we’ll update tomorrow!

UPDATE:
Philipp will be penalized by three positions on the starting grid for Race 1 for impeding Toprak during FP 2, while the German proceeded slowly on the track. Oettl immediately apologized, not having seen the opponent coming, but the misunderstanding, fortunately, did not cause any kind of accident.

Philipp Oettl (Rider):
Today it was not so bad! We used one tyre per session today, so we didn’t look for the time attack. In the afternoon it was important to do many laps with the SCX, because it’s the first time for me here in Donington. I am really confident tomorrow we can improve our laptime, and I will try to focus on the Superpole as we will have a small penalty, too. We will try our best!”

Denis Sacchetti (Team Manager):
“I think Philipp has adopted a right strategy, to ride with used tyres in both sessions trying to get to know and understand this track as best as possible, which is short, but very particular, in true English style. This is why it must be interpreted and aiming for the time today would have been useless. But on the track I saw him riding well, and if we fix the last sector we can fight for the top positions. I am sorry for the penalty, Philipp did not impede Toprak voluntarily, from the Race Direction video it is clear, but rightly we need to lead by example, so we share the decision of the FIM”