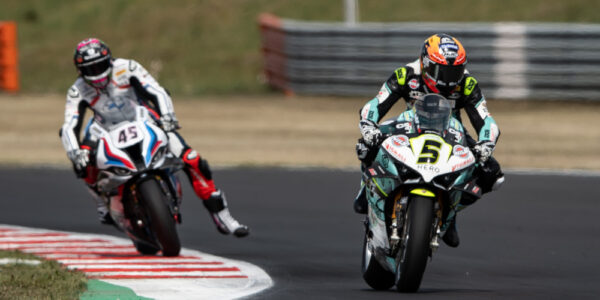 DAY 1; PHILLIP SHOWS TO BE CONSTANT INHIS GROWING PROCESS, BUT THE FEELING IN MOST IS NOT THE BEST POSSIBLE YET!

Friday at Autodrom Most turned out to be more complicated than expected for Philipp Oettl and Team Go Eleven; despite a good eleventh final position, the feeling is still not great, and the V4-RS was nervous and aggressive. The best lap on the 32 confirms however that Philipp manages to get the best even if the bike is not firm and stable as the German rider would like.

The FP 1s are always used to become familiar with the track and the bike, setting a basic set-up to work on. Here, too, in the Czech Republic, Go Eleven has focused on working with used tyres, almost finished, so as to be able to use more tyres in the days to come. In 23 completed laps Philipp showed consistency, being fast in all sectors; the classification as always is just provisional because several riders used a new tyre on the final minutes, improving the laptimes.

In the afternoon session Philipp was immediately able to get on track with the new rear solution brought here by Pirelli; he immediately improved several tenths to get inside the Top Ten, but the white-blue-black V4-RS seemed a bit too nervous and difficult to ride, especially in the third sector. The times, however, were fast even after a few laps, which is good in case of a dry race. In the last five minutes, the Piedmontese team put on a new set of Pirelli, combined with a new rear shock solution, Philipp lowered immediately on the first flying lap, dropping below 33, but then found some traffic due to slower riders, thus not being able to take advantage of the second lap.

For tomorrow it will be essential to work on the set-up, study the data collected today, and create a slightly more calm bike, which allows to be ridden for the 22 laps of the race without too much difficulty. However, the room for improvement is large, so much so that Philipp’s best lap came in a lap in which the rider himself thought he had made many mistakes. On Saturday in Most, however, according to forecasts, the rain should fall abundantly and we could assist to one of the first real wet races of the year. Philipp’s potential in the event of a Wet Race? We will evaluate it tomorrow, perhaps, since the number 5 at Estoril, the only rainy day of the 2022 season so far, was forced to raise the white flag following a broken collarbone on Friday!

Philipp Oettl (Rider):
“The first day here it was not so bad, I am not unhappy, cause even if we have quite some problems with the set-up, I feel I can improve even better. The position is also not so bad, we improved a bit in the afternoon. For tomorrow I think we have to find some new solutions, there are areas in which both me and the bike can improve compared to the other rider. I am struggling a bit, cause on this circuit the Ducati is like a Beast, quite difficult to ride. Together with the Team I am sure we can find the problem. Probably tomorrow can rain, that would be my first time on wet since Barcelona test!”

Denis Sacchetti (Team Manager):
“This first day is quite positive, because we are in line with Philipp’s latest performances. In the first sector the asphalt is new and the times were immediately much faster than last year. Philipp’s feeling was a bit particular because he feels the bike nervous, but we have already identified some points on which to improve. I think we have the margin to make a good leap forward on the race pace, we are two or three tenths to stay comfortably inside the Top Ten. Tomorrow however it could rain and in that case all the cards will be reshuffled!”