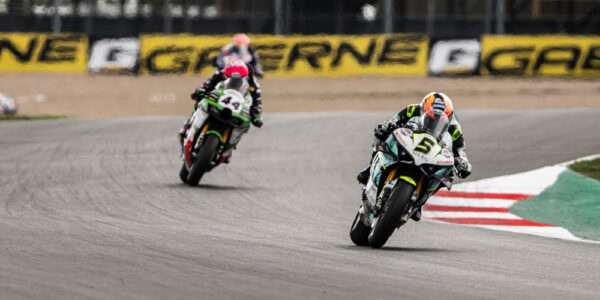 OETTL RESTARTS FROM WHERE HE STOPPED; P 8 IN MAGNY-COURS RACE 1!

On the first day in dry conditions, Philipp Oettl proved competitive and fast on the Magny-Cours track. After taking the best qualifying of the season, finishing tenth, just 0.5 seconds from pole, he was able to manage the 22 laps of the race well, finishing eighth. Another Top Ten achieved, another good result for the whole team!

The FP 3 proved to be crucial for the development of today. Only session available with slicks to find a good set-up both on the Superpole lap and for the race distance. The German rider entered the track motivated, immediately finding a good feeling with his Ducati V4-R. After a change of compound in the middle of the session, he finishes in tenth position, making good use of his strengths especially in the first and fourth sectors.

Free Practice 3:
P 1   T. Razgatlioglu   1.36.626
P 2   S. Redding   + 0.571
P 3   L. Baz   + 0.676
…
P 10   P. Oettl   + 1.118
In Superpole Philipp started confident that he could get a good result, given the excellent first session of the morning. At the first attempt he manages to make good use of the soft tyre and enter the Top 8, but as often happens, the second attempt is what establishes the final standing. The number 5 returns to the track, scores a great first sector, then defends himself well in the second and third, the most delicate points of the track, and sets an excellent last sector, finishing fifth for the moment. At the end of the session he is tenth, just half a second from pole position, but, above all, with a tenth faster he could have started from the second row. When the ranking is so short there is always a bit of regret for not having achieved the big result, but it is still a great performance for the German rookie. Fourth row, good starting position from the outside in corner one, and a race to be race openly.

Race 1 starts with uncertainty for the WorldSBK riders; no one was able to make a real long run, consequently no one could know what to expect at the end. At the start Philipp manages to defend his position well, immediately trying to pass Mahias. At the beginning of the race the pace of the top ten is very tight, so much so that the distance between the riders is short and the race remains open to any interpretation. Oettl passes Mahias, tries to be kind with the tyres in the first few laps, especially being aware that he has opted for the softer solution at the front. Towards the middle of the race he loses his position against the two Honda HRCs, but at the end, tenth after tenth, he recovers on Vierge, overtakes him in turn five, then sets off in pursuit of Lecuona using Rinaldi’s train. On the last lap Lecuona, Locatelli and the Go Eleven rider are fighting for seventh place; the Italian passes both of them, accusing perhaps a minor drop in the tyre, Philipp overtakes the Spaniard in the third sector and concludes eighth. Good result, which allows us to restart the Championship from where he stopped in Most, showing good growth. Today’s result is excellent, but in the Team there was a little regret because sixth place was within reach; for tomorrow it will be necessary to take a further step to close the gap from fifth place!

Philipp Oettl (Rider):
“Today it was a positive day! Yesterday the weather didn’t help us a lot, so today it was not so easy to set-up a bike for any kind of conditions. In FP 3 we did a good job, then in Superpole, too. The Top Ten was our personal best result in qualy, we were really really close to the Top 3. The start was good, the race then was solid and consistent. I am happy because it’s the closest gap to the front we had this year so far, so we can be optimistic. Tomorrow in the Warm Up we try to improve our feeling, we need to find a good solution for the front here, today we were at the limit with the tyre drop. Let’s see tomorrow, but I am happy!”

Denis Sacchetti (Team Manager):
“This morning Philipp was very good, he almost surprised me, because no one expected him to be so fast the first time on this track with a Superbike; we have to keep in mind that yesterday they didn’t ride on a dry track so he was almost without references. In qualifying He stopped two tenths from Alvaro, it’s so close! The result of the race makes us happy, he rode well without making mistakes and he put on factory bikes and riders behind, besides we got the shortest gap from the first since the beginning of the season! Now we have to work for tomorrow, today we had too much front tyre drop, we will try to improve this aspect and get even closer to the Top 5, trying to reconfirm ourselves in the positions of Race 1! ”