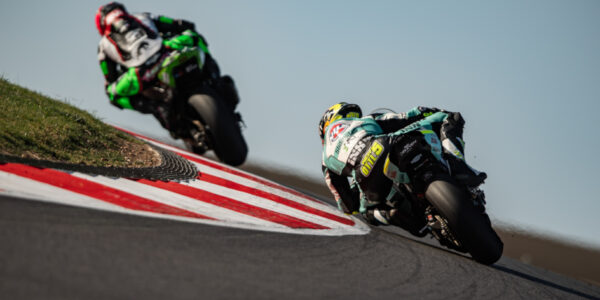 RACE 1 AFFECTED BY A MISTAKE, BUT THEN RESUMED WITH A HUGE COMEBACK!

Saturday seems to turn its back on Team Go Eleven! Once again the pace to be in the top eight was there, but, today, an “on the gravel” in Turn 1 on the second lap forced Philipp to loose nine positions, then forcing him to make a strong comeback with many overtakes!

In FP 3, Oettl felt at ease from the very first laps, despite a used tyre from Friday, immediately dropping to 41 and setting a good pace. Back in the pits, he then attempted the time attack with the SCX, here in Portimao considered the qualifying tyre in the absence of the SCQ. With a spectacular lap, he stops the chrono in 1.40.915, entering the top six. In cool conditions, the Ducati V4-R ridden by the German rider always manages to be very competitive, probably due to the higher grip on the track.

In Superpole Philipp Oettl managed to further lower his reference, also improving between the first and second time attacks. Despite a time very close to the 2021 track record, the Top Ten remained at one tenth, with three tenths he would have entered the top eight; those three tenths left between the third and fourth sector compared to the best references of the German rookie. Twelfth place taken, not a bad result, but perhaps a few better positions would have been ideal in view of Race 1 and Superpole Race.

In Race 1, as in Barcelona, Team Go Eleven fails to concretize the potential shown; after a good start, Philipp joins the group fighting for the P 8, but on the second lap, in turn 1, he ends up wide, losing nine positions, thus finding himself twenty-first. He starts a furious comeback, with so many overtakings and laps on 41, recovering nine positions in fourteen laps. On the finish line he gets to worry Lecuona, but unfortunately the race ends before he can attack him. The pace was really good, definitely in line to finish eighth. In any case, the performance was superb, showing great conviction and nastiness in the middle of the group. Tomorrow we can surely be in the fight within the Top Ten!

Today, however, the result is not and should not be the main topic; in the Supersport 300 race, Victor Steeman was involved in a very serious accident, and now he is in hospital where he is racing the most important race. The Go Eleven Team want to be close to the rider, the family and the Team, hoping that everything will go well, and that good news will come as soon as possible.

Philipp Oettl (Rider):
“Today we had a good start again, in the first lap I overtook a couple of riders, but then I made a mistake in the first corner, loosing many positions. I was at the really back of the standing. I gave my best to come back as many positions as possible, I had an incredible pace, that’s why I am optimistic for tomorrow. In the Warm Up, we will try something more, to find some solutions mainly on the front. Today I made so many overtakes, I enjoyed it, but tomorrow we need to stay focused and to take home what we deserve! Today it was a hard day for everybody in the paddock; Victor is fighting for his life in the hospital, so I want to wish him and the family all the best, waiting and hoping for good news!”

Denis Sacchetti (Team Manager):
“Today is a bad page in motorsport, unfortunately a young rider is fighting in the hospital and I want to wish him the best, first of all waiting for him to win the battle and get back on track as soon as possible. Our day was a bit bitter; unfortunately Philipp made a small mistake in turn 1, which, being on the second lap, cost us many positions; it seems that the Saturday race never wants to go the right way. After the mistake, however, Oettl resumed with great tenacity, coming back inside points and taking Lecuona! He was among the fastest on the track, with a great pace. Now we work and improve something for Sunday, and I’m sure we can take away some satisfaction here in Portimao!”