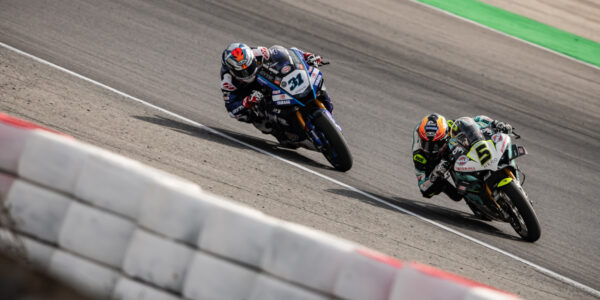 SO CLOSE TO THE TOP TEN, BUT MISSED BY JUST A FEW TENTHS!

Solid Sunday for Team Go Eleven on the Rollercoaster of Portimao. Philipp conquers a double eleventh position, always finishing really close to the Top Ten, just a few hundredths from tenth place. That’s a pity he didn’t hit the target, but the German rookie has always shown himself to be competitive and fighting for important positions, also in terms of final gap in the race.

In the Warm Up, Oettl immediately proves to be fit and in line with the target performance, setting his pace on a low 41 for several consecutive laps. He does not risk that much and saves some energy in view of the races.

In Superpole Race Philipp and Team Go Eleven take a risk; they choose the rear SCX, the soft qualifying tyre, which, at least on paper, should provide extra grip in the first few laps, and suffer at the end. Oettl starts well, then a contact in turn three with Gerloff slows down him a bit; contrary to what is predictable, in the first two laps, he struggles to find the right pace, but from the third lap onwards he lights up and closes the gap with the Top Ten. He comes back, fight with Vierge, but in the final stage the tyre drops and he can’t take advantage of his strong point, the exit at the last corner. He finishes eleventh, in the slipstream of the Hondas and Baz, but unfortunately he does not improve his grid for Race 2. The choice of the SCX, perhaps, turned out to be wrong, but it was a calculated risk, which had to be taken to look for something different. In any case, once again, the group we are fighting with was just a few tenths ahead, and the performance of rider number 5 was definitively positive.

In Race 2 Philipp starts badly as he is outside in the first three corners, thus losing some positions. In the first few laps, he can’t ride below 42, finding himself fighting with slower riders, and not riding his own lines. After overtaking Mahias and the BMWs of Van Der Mark and Laverty, Philipp is 3.8 seconds behind Loris Baz, who was then first of the Independents. He starts a very long run-up, riding on the low 41, 41 and a half, so much so that he manages to close the gap before the last 4 laps. Gerloff also recovers, gets into a fight with Philipp, manages to take a small advantage and tries to attack Baz. Due to the fight between the two, Oettl finally closes up and tries to play his cards; he overtakes Loris once, then the French is back on the inside, Loris overtakes the American, but the latter manages to create a small gap, which will be decisive. In the last lap, everything happens; Philipp attacks in turn one, goes long, Baz misses shortly after and in the end they arrive really close. Go Eleven takes home another eleventh place, a good result, but still aware that we could have entered the top nine with a couple of faster laps in the first part of the Race.

WorldSBK concludes the European Rounds, and moves overseas, to Argentina, where Round 10 will take place. The track is spectacular, the atmosphere there is always very warm, and despite the distance, we are sure that the show will be guaranteed. See you in El Villicum, 21-23 October 2022!

Philipp Oettl (Rider):
“Overall we did a good job this weekend, I didn’t feel good this weekend, I was a bit sick, and it didn’t help our progress. I think we did a good work, we finished strong, we were fighting. I wanted the Top Ten so hard, especially in the last race, but we just went close. I think we are in a good way, in a positive group of results and we have to continue like this. In the last lap today I tried to overtake Baz in the first corner, but I went off the track, then I was back in the track thinking it was over, but he made a big mistake, so I was close to him again, but the finish line came and I couldn’t pass him. Let’s see the next round, I think we can be in the fight there, too. ”

Denis Sacchetti (Team Manager):
“In Superpole Race we risked the soft tyre, we expected something more, but the performance of the tyre was strange, different from what we expected. In Race 2 he remained outside the first corners, trying to take advantage of more free space, however we could not recover anything. I think then he had a good race, fighting the Best Independent almost to the checkered flag. We have to consider that he has had stomach problems for 2 days, and he was not in perfect shape, then on a so difficult and physical track, having no energy certainly does not help. Also for this reason I am happy with the tenacity and determination that Philipp is showing us. Every race we grow and improve in some area so we have to continue this trend!”