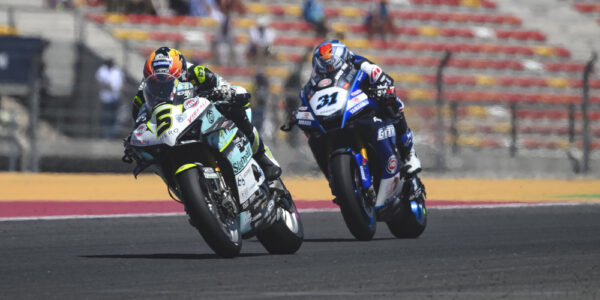 On Sunday in San Juan, Go Eleven could be happier than on Saturday, as Philipp managed the physical difficulty by fighting and giving 100% even in the long distance; in reality, however, looking at the ranking, Team Go Eleven can only bite their hands for the missed opportunity to finish Best Independent for the first time in 2022.

The day on Sunday begins with much higher temperatures than on Saturday; since the Warm Up the asphalt temperature rises over 30 degrees, further changing the conditions of the track. Philipp enters the track with new SC0 tyre, trying to understand the changes made yesterday evening in order to manage the loss of power in the arm. He is fast from the start, setting the best time of the whole weekend in 1.38.1, even better than qualifying. The left arm, however, still has some problems, so much so that he prefers to save the last few minutes to be more relaxed for the races.Warm Up:
P 1   J. Rea   1.37.141
P 2   A. Lowes   + 0.007
P 3   T. Razgatlioglu   + 0.205
…
P 12   P. Oettl   + 0.963

Before the Superpole Race Philipp has the opportunity to carry out a treatment in the Clinica Mobile, in order to relieve contracture. The choice of tyre falls on the SCQ, a risky choice, but taken by mutual agreement between the team and the rider to try to be as aggressive as possible. He starts with determination, but in the first laps he loses some time with Laverty, swapping positions several times; then he goes into battle with Gerloff and Redding, but unfortunately the group fighting for the first nine is far away and the gap cannot be closed. He finishes the race fifteenth, suffering again at the end, especially from a physical point of view. The rear tyre, perhaps, was not the best possible choice, but still a risk that had to be taken.

For Race 2 Team Go Eleven opts for the hardest rear tyre available, so Philipp can not worry too much about tyre management and think about riding smoothly, preserving and managing the strength in his left arm. At the start he is immediately in a group of fast riders, Fores, Gerloff and Mahias; manages to free himself from them, pushing and trying to close the gap on Laverty, Best Independent rider at the end of Race 2. As long as the strength holds, as long as his left arm allows him to ride well, he comes back half a second per lap on the Irish BMW , then with seven / eight laps to go, he gives up and is forced to finish the race fourteenth. Certainly not the desired result, but after yesterday’s race, finishing two races today was not so obvious. And today Philipp managed to be much more consistent over the long distance.

Today the regret for missing an important opportunity to finish at the Parc Ferme as Best Independent is what remains in the minds of the whole Team; Philipp has shown that he is fast and has the pace, but unfortunately when physical problems arise, there is nothing that can be done during the weekend. Now all that remains is to understand the reason for this sudden problem on the left side, try to solve it as soon as possible in view of the season finale and come back for the double Indonesia – Australia in the positions that compete with us!

Philipp Oettl (Rider):
“Overall it was a difficult weekend, but today we did a small step in the right direction. I worked with the Clinica Mobile and it helped a little bit the feeling in my arm. Today I could fight a little bit longer in the races. From the Superpole Race I expected a little bit more, the tyre choice was maybe not the best solution, but I decide together with the team to take this risky choice. In the race 2 we opted for as harder tyre compound compared to yesterday. It helped a bit for the feeling through the long distance, I was more consistent, I reduced the gap compared to yesterday. During the race I couldn’t push to my maximum, I had to manage to get to the end, but in the last 5-6 laps I struggled a lot. Compared to Barcelona and Portimao, it was a track were we didn’t tested before, but I could expect bit more. Now we have time to reset everything, and prepare for the next race in Indonesia!”

Denis Sacchetti (Team Manager):
“It was a difficult weekend, the arm problem certainly influenced our results, and today we lost an opportunity to go to the podium as a top independent, but on the other hand I am proud of Philipp.He grit his teeth and he raced fighting throughout the race, other riders would have retired or even would not have even started. What makes me happy is the union of the team, the work group and the motivation we all have, we know we are fast and to have room for improvement, these things are important to get where we want to go. This weekend is to be forgotten, but I am sure that already from Indonesia we will be able to return to our positions!”