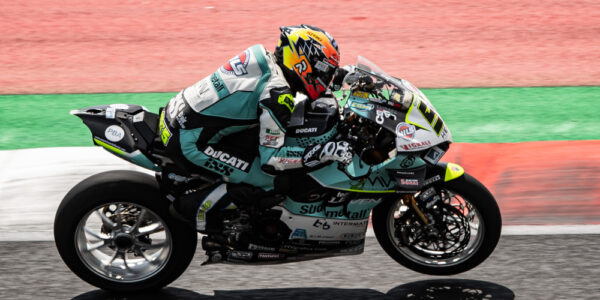 NEW (and SLIPPERY) ASPHALT, GOOD STEP IN FP2, BUT THE RIGHT FEELING IS STILL MISSING!

Friday saw the riders hit to the track for the first time on the new asphalt of the Mandalika circuit; as often happens when the tarmac is recently redone, in the first sessions the track shows slippery, and with very slow and insignificant times. As the laps went by, conditions improved, with riders and teams able to work ahead of the races, even if the day wasn’t really smooth.

In FP 1 the WorldSBK riders took to the track in rather difficult conditions, almost at the limit of the “wet” times, trying more than anything else to regain the feeling with the track, understand lines and trajectories for those who, like Philipp, had their debut with the Superbike, and just leaving tyre on the asphalt. Team Go Eleven has opted to use only one set of tyres, due to the limited usefulness of the laptimes. Oettl completed 10 chrono laps, getting his best on the last chance before returning to the pits. A good 38.8 that earned him a momentary Top Ten position, before some opponents took advantage of a new softer tyre. In any case, the times were more than 4 seconds from the record, far too far to understand anything of the values ​​on the field.

In FP 2 the asphalt immediately showed itself to be in better conditions, so much so that several riders entered with fresh tyres; in the first laps Philipp is at ease, improving the time of the morning and entering third position. Just when he was starting the long run to evaluate the durability of the rear SCX, and the front, also very stressed in Mandalika, two red flags caused by some crashes interrupt the session. In fact, new unused tyre; so the technicians decide to try a new solution by extending bike length, with the aim of reducing the nervousness of the bike. Upon returning to the track Philipp immediately drops to 35, scoring a formidable second sector, but in the following laps he makes several mistakes due to a clear difficulty in stopping the bike. As a result, he just can’t take out the most from the new tyre, which surely could have given him a few tenths less. Today the Italian team was unable to carry out a real long run, and the choice of compounds will also be evaluated tomorrow. However, it remains a good thirteenth position, not far from the Top Ten.