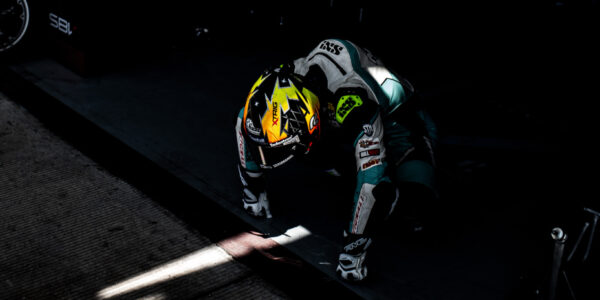 UNFIT FOR RACE 2, AS A CONSEQUENCE OF RACE 1 CRASH!

Sunday in Mandalika turned out to be quite bitter for Team Go Eleven and Philipp Oettl; after a Warm Up aborted due to a small technical problem, the Superpole Race saw the German rider have a strong start, finishing in the top ten at the end of the first lap, but then he finishes the race in difficulty, never managing to regain the feeling with the asphalt of Mandalika after yesterday’s big crash. Returning to the pits he immediately felt unwell, partly due to the physical consequences of the highside, partly due to an intestinal blockage and headache. As the symptoms were very similar to a head injury, and having a clear mark on his head, he was declared unfit by the circuit doctors and sent to hospital for further checks.
Superpole Race:
P 1   T. Razgatlioglu   15’28.792
P 2   J. Rea   + 0.586
P 3   A. Locatelli   + 1.821
…
P 14  P. Oettl   + 17.902

The Tac and all the tests in the hospital have provided excellent news; no head trauma, no fractures, probably just a severe general contusion and a gastrointestinal problem. Important news, because in less than 5 days we will see the WorldSBK bikes in action on Philipp Island!

Philipp Oettl (Rider):
“This weekend was really bad in results. We were strong since Friday, I am sure I had a strong pace, but I just couldn’t show it. Today we were really unlucky in the Warm Up, I needed to do some laps to get my feeling back, but unfortunately I couldn’t due to a technical problem following yesterday crash. We lost the session and I had to get my feeling back in the Superpole Race. I had a good start, I was fast, then I focused just on staying in the line, not making mistakes, but it didn’t pay.  During and after the short race I felt really strange, really similar to head concussion, so doctors pushed me to go to the hospital for further exams. At the end I have nothing bad in my head, I just don’t feel good I have headache, and I am quite upset for my unfit in Race 2, too. This year, sometimes it happens that things goes against us, but it’s part of the growing process and most important is to be fast and competitive. Now let’s rest and be back in Australia, where I expect to be ok and fit!”

Denis Sacchetti (Team Manager):
“Unfortunately it was another difficult day. The problem in the Warm Up didn’t help, because Philipp was unable to regain confidence with the bike. In the Superpole Race he started well, even in the Top Ten, but after the first laps he failed the feeling, perhaps trying to avoid what happened yesterday. After the race he felt unwell, and together with the doctors it was decided to carry out new checks. I accompanied him to hospital, and fortunately all the tests gave negative results. Now he has a few days to rest, then we’ll see his condition before Australia!”