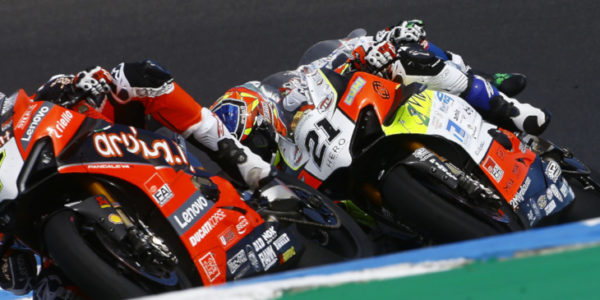 What a race opened the 2020 season! Spectators, fans and those who spent the night awake to follow the WorldSBK was certainly not bored. Overtaking, bagarre and unexpected twists: everything happened in the 22 laps, with four riders at photofinish!

Rinaldi started the day in FP 3, testing a new solution on the durability of the rear tyre, to improve in the second part of the race. The small changes compared to the previous day have not paid off, so we opted to start again from the configuration of the second free practice.

In Superpole Michael immediately found the good feeling with the Ducati V4-R. His best lap in 1.30.793, for the first time on the weekend under 31, less than seven tenths from the top was the proof. With the qualifying tyre on, an improvement of about half a second was expected, but something did not work and even the lap time worsened significantly. “No grip, too nervous”, these are Rinaldi’s quotes jumped off the bike. Being positive, there was the awareness of having a good condition on the long distance.

On the wrong day of Jonathan Rea, who crashed in an attempt to overtake Rinaldi, after a contact with Sykes in the first laps, a furious battle went on stage. The Go Eleven race is two-sided: a first part in defense and a second completely on the attack with an impressive pace, which allowed Michael to hit the top ten at the finish. A data is particularly interesting, the distance of the V4-R number 21 from the top at lap ten was around ten seconds; on the finish line, after twenty-two laps, the gap from Toprak (winner of race 1) was 11.9 seconds. As anticipated yesterday, the rider from Romagna has been able to manage well tyres and energy, so much so as to start his comeback and, in the last few laps, to be even one of the fastest on the track. Guys, what a last lap between Chaz Davies, Tom Sykes, Michael Rinaldi and Eugene Laverty (in order of arrival), overtaking on overtaking, brakings at heart rate and photofinish with the four bikes side by side in less than a tenth! However, a bit of regret remains for the first part; if tomorrow the bike performs well from the start, we will see some good ones.

Michael Rinaldi (Rider):
“If we look at the half-full glass, the race has been better and better, because from the tenth to the last lap I kept up with the leaders, which is definitely positive. In the first ten laps, however, with the new tyre I had no feeling and I took ten seconds. When the rear went down, I rode better and in fact the times were in line with the front group. We are doing well with the used tyre, while we have to improve at the start of the race. Anyway, it is the first weekend, it is understandable not being 100%, however, I feel a little regret because we could have done really really well if we had kept the pace shown at the end of the race since the green light. Now, let’s have a check at the data and tomorrow we can go back to the charge!”