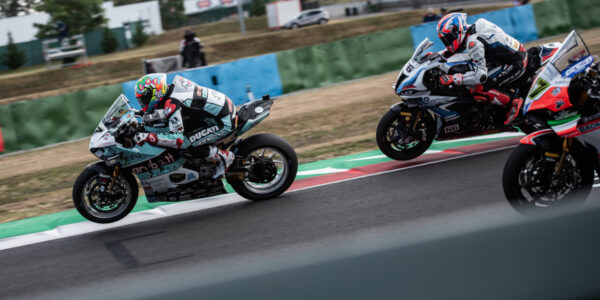 An hard day, with a few thousandths to make the difference between the riders, the one of WorldSBK on the French circuit of Magny-Cours. both Superpole and Race 1 gave a great show on the track, with overtakes and line crossings at very high speed.

The morning opens with the FP 3 completely dry, but in cool conditions. Team Go Eleven focused on a comparison between the different tyres, starting work on a softer one, then ending with the “classic” SC0. However, Chaz seemed fine on the bike, so much so that he remained close to the top, with several laps on the 37 pace.

For the Superpole, scheduled at 11.10, the sun warms the new asphalt of the Nevers track; Chaz and Go Eleven choose to take advantage of both qualifying tyres immediately. At the first exit the Welsh rider cannot find the right starting point and ends a rather slow lap. The second attempt is the fundamental one; just one lap to decide most of the results of the French weekend. The number 7, while improving his previous best by more than a second, takes home an eleventh place on the grid, which earned him the fourth row (which later became tenth following the injury of Mahias). Not the best in view of the races, but it’s a position that can still allow the Team to fight for main positions. The only regret is that, with only a few tenths better, two rows could have been climbed. The race, however, at Magny-Cours, allows for great overtaking, so anything is still possible.

Before Race 1 the asphalt temperature rises considerably, reaching around 40 ° C. An almost compulsory choice of tyre, with all the riders on the grid opting for the “medium” solution, the SCX development seen for the first time ever at Misano. Chaz loses two positions at the start, remaining a bit closed on the first lap, then a very long group of riders is created fighting from sixth to thirteenth position. Many ride on the same times, with overtaking, braking and intersections at every corner; the Welsh rider however, always managed to stay in the top positions of the group, fighting above all with Redding, Sykes, Bassani and Bautista. In the final laps Davies showed his teeth and manages to close well on BMW’s Englishman, opening the battle with Bassani and Haslam. Leon is passed out of Adelaide, while Bassani undergoes the overtaking of the light-blue Ducati at turn 15. Best Independent Team is on the finish line! Go Eleven returns to the Parc Fermé after Race 2 in Assen; still not the result the Team aspires to, but finishing races like this is always a great satisfaction!

For tomorrow the Team will try to improve a little bit on the braking and the feeling at the front, so as to allow Chaz to attack from the first laps, especially in Superpole Race. Improving the grid position and then doing a good Race 2 is the goal!

Chaz Davies (Rider):
“It was an OK Race! To be honest I am not really happy because I felt like we had a little bit better pace than the one we showed. I was just struggling a bit in the group, to ride my lines and my style. It was a bit difficult to stop the bike and reacts with the other riders in the breaking area. So, I had to give some margin there and then it was affecting my ability to set-up passes and to make passes. The Race was a bit frustrating in some ways, but of course it was good to finish Best Independent in the end; overall the bike didn’t feel too bad, we had a couple of things that we can work on for tomorrow, but overall the main thing is to try to understand how we can race a little bit better with the other bikes.”

Denis Sacchetti (Team Manager):
“The practices had given us hope for something more for the race, but evidently the track conditions and temperatures were so different that, they made us losing a bit of performance. Chaz still managed, in the final, to take the victory as Best Independent, a result that is very important to us and we had fun watching him fight with the factory Hondas, BMWs, Redding and Bassani!